Nine months ago the odds being offered on Leicester City winning the Premier League were identical to the quoted odds on Elvis Presley being found alive this year and twice as long as the 2,500-1 odds offered on Eddie “The Eagle” Edwards winning ski-jumping gold at the 1988 Winter Olympics. Clearly the bookmakers will now have to recalibrate their “risk adjusted return” models to take into account those complete outliers just in case they do come true!

The financial markets also have to recalibrate their models as the graph below shows. The breakeven rates have over the last 2 years exceeded the forward swap rates for the first time in a generation as low growth and deflationary pressures impact the global markets. The IMF has warned that time is running out for the global economy and has cut its global growth forecast from 3.4% to 3.2% on the back of continued concerns about Chinese growth. With the US economy only managing growth in Q1 of 0.5% and the UK at just 0.4% it might be the EZ against the odds that lifts us out of the malaise as GDP returned to pre-crisis levels of 0.6%.

Although UK inflation has risen to 0.5% this month the underlying trend is deflationary with UK food deflation of 0.4% in March and non-food deflation down for the 36th month in a row. With low interest rates and low inflation it is no surprise to see that consumers continue to spend with new car sales in the UK the best in 20 years with over 500,000 new cars sold and UK mortgage lending hitting a record high of £17bn in March.

In the corporate sector there is evidence, particularly in the manufacturing sector, that the impending Brexit vote is having an impact on growth. With warnings from the IMF, World Bank and the OECD amongst others warning of the dire consequences of a Brexit, it’s no wonder that the odds have shortened and predict a comfortable win for the “Stay” camp at 4/11. That said if the unlikely does happen it could mean a total recalibration of the forward interest rate curves, which currently predict the 1st UK rate rise to be in December 2019!

GBP future inflation expectations expressed through 20 year Inflation Swaps ended slightly lower, opening at 3.25%, with a high of 3.27% and closing at the low of 3.21%. 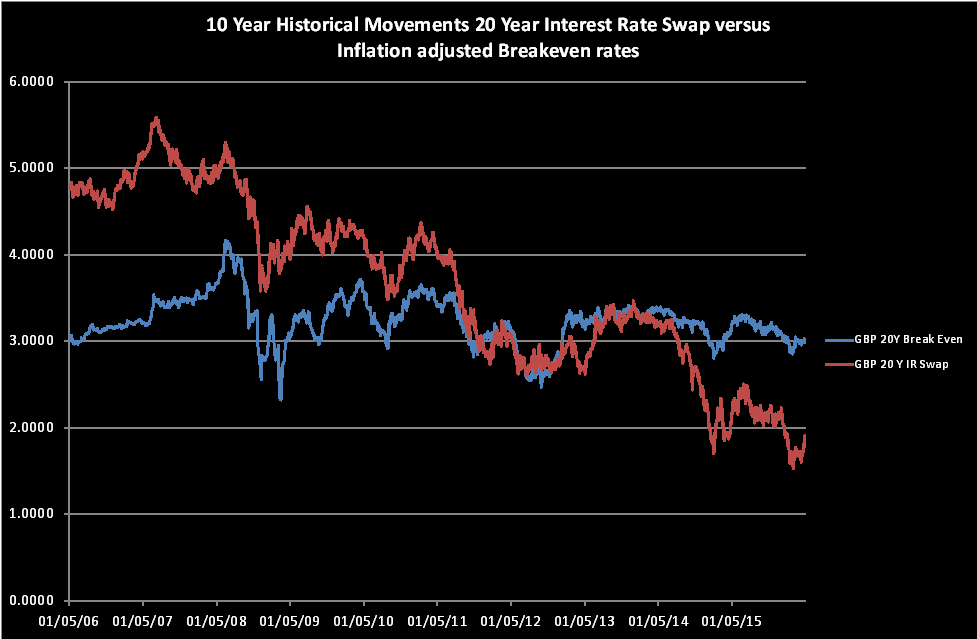