It’s been a long time coming but at last interest rates in the UK have moved, but are they going in the right direction? The Bank of England became the 55th central bank to cut rates this year lowering the Base rate to 0.25% and increasing the QE programme by £60bn, which sent bond yields tumbling to record lows. After the shock of the Brexit vote it’s not surprising that the outlook for the UK services industry dropped the most on record, the construction industry slumped at its fastest rate in 7 years with growth down 0.9% in June and UK recruiters highlighting that jobs demand has fallen the most since 2009. However, retail sales have jumped 1.4% in July a 1.1% increase year on year and manufacturing has hit a 2 year high as the pound depreciates. Whilst the UK economy is set to slow, it is unlikely to dip into recession according to the latest IMF forecasts which say we will only grow at 1.3% in 2017 (down 0.9%).

The Eurozone economies grew only very slightly in August and with inflation staying the same at 0.2% it’s likely that the ECB will resort to further monetary stimulus. A similar picture remains in Japan where the economy grew just 0.2% in Q2 v a 0.7% forecast and the central bank launched a further $45bn stimulus package. The similar tactics employed by both the ECB and the Bank of Japan have not worked as expected, so it’s unlikely to change any time soon!

In the US, the case for raising rates has yet to be made. Whilst 255k more jobs were created and new home sales were the best since 2007 and higher than expected at 654k (580k), retails sales were unchanged and car sales started to decline. More importantly, the rate of inflation fell to 2.2% which would suggest that there will be no quick rate rise.

Fact of the month: the VIX Index, or “Fear/Uncertainty” Index, is at its lowest for 2 years despite the Brexit vote.

GBP future inflation expectations expressed through 20 year Inflation Swaps ended higher on the month, opening at the low of 2.99% and closing at the high of 3.18%. 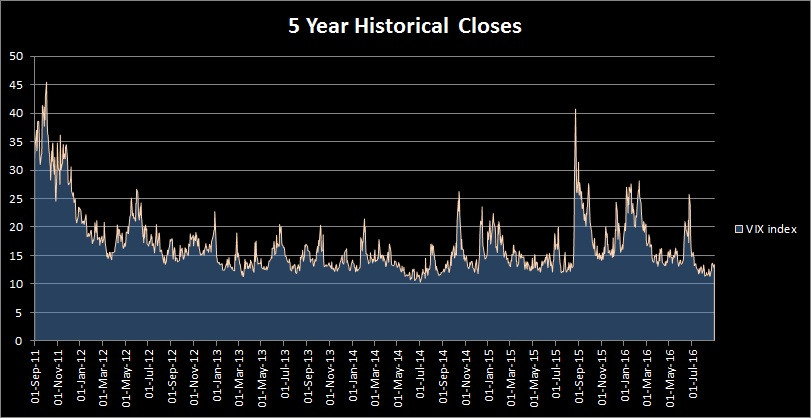