The Bank of England has raised interest rates above 0.5% for the first time since March 2009, although this is still the first-time rates have been set at 0.75%, base rates were cut from 1% to 0.5% as part of the ongoing emergency response to the financial crisis. The 0.25% increase follows the removal in November of the emergency cut to 0.25% delivered in the aftermath of the Brexit vote.

Market expectations for a 0.25% base rate increase were close to 90% before the announcement meaning there was little impact upon market pricing shortly after the decision, future rate expectations actually fell slightly after the Governor’s press conference.

Perhaps the most interesting element of the quarterly inflation report, published alongside the decision, was the analysis of equilibrium real interest rates. The U.S. Federal Reserve have been publishing estimates of what is commonly referred to as r* for some time now. The BOE decided to take a slightly different approach utilising an r* (short-term equilibrium) and R* (long-term trend) rate. To simplify, the short-term real rate (mirroring forecast policy) is expected to deviate from the long-term trend rate due to temporary factors (e.g. financial conditions and confidence), whilst the long-term rate evolves according the structural factors around demand for capital and the stock of wealth e.g. demographics and productivity.

The summary of the bank’s analysis suggests that the “lower for longer” mantra we have maintained over the past five-years should continue to hold. The analysis suggests that R* has fallen by more than 2 percentage points since 1990, falling from 2.25%-3.25% to around 0%-1% today, with the modal point being closer to 0.25%. However, with populations expected to continue ageing and income inequality to persist, the trend is likely still downwards, the Bank’s analysis suggesting R* ends up nearer 0% or slightly negative, with r* currently around -0.5% to -1%. The level of economic growth associated with this level of interest rates, keeping inflation close to target, is about 1.5%.

Financial markets are not pricing another full hike until this time next year, Brexit uncertainty remains a big factor weighing against the relatively upbeat Bank of England assumptions about global growth. Therefore, it seems that Brexit developments will continue to dominate market pricing over the coming months, but the long-term message is still one of much lower interest rates than persisted before the financial crisis, with base rates moving between 0% and 2% over the course of the economic cycle. We continue to believe that this supports interest rate cap structures over fixed rate hedging given the not insignificant possibility of the UK exiting the EU either without a deal or on potentially unfavourable terms for short-term growth. 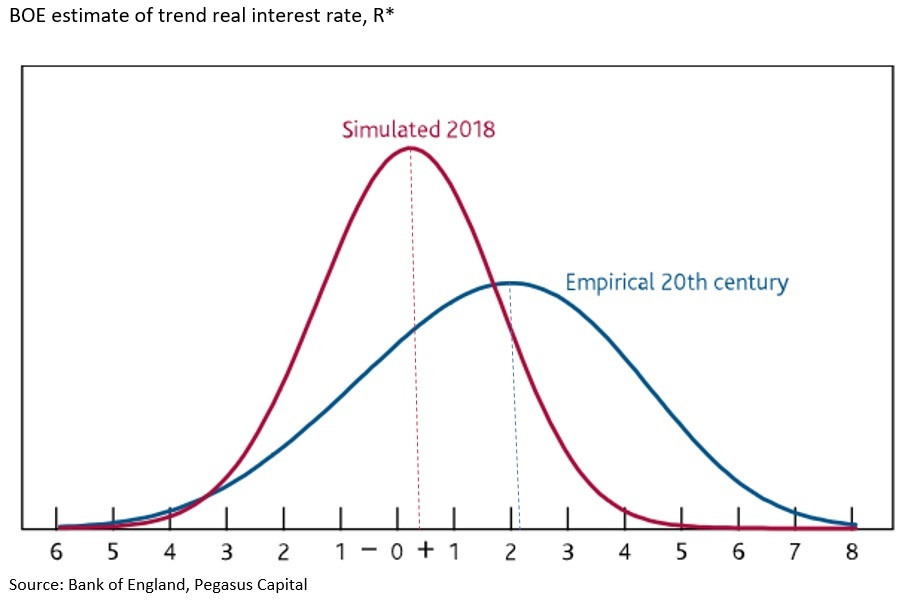