The EU leadership have to act quickly on 2 key issues in the coming month as Kiev warns it is on the brink of full-scale war with Moscow. Having banned imports of US and EU goods in an escalation of the “sanctions war”, Russia has been given a week by the EU to reverse course on Ukraine or face a new round of sanctions. The ECB President Mario Draghi has already warned that the Eurozone is at economic risk as Russia ramps up the trade war and with German investor confidence diving and European stock markets taking fright, the Euro has slid to an 11 month low and the key Eonia benchmark interbank rate has dropped to its lowest in the history of the Eurozone.

The other full blown crisis that requires immediate action is the battle with deflation, which is already evident in Portugal, Greece and Spain. Across the Eurozone inflation has dropped further this month to 0.3% and with the French economy flat lining and Italy falling into recession with GDP at -0.2%, the ECB is on standby to pump billions into European banks as early as this week.

In the UK, the Bank of England kept rates unchanged, despite 2 MPC members voting for a rate rise; the first for some time. Of more surprise was the fact that the BoE cut its wage growth forecast by 50% as salaries and wages remain stagnant at best. With slack in the economy and a drop in the inflation rate to 1.6% (1.9%) any interest rate rise look like being pushed back to Q1 2015. This was reflected in the performance of GBP which had its worst losing streak since 2008 as investors moved their expectations of a rate rise back from Q4 2014. With manufacturing output at its slowest for a year, consumer confidence dropping for the first time this year and the Government missing its borrowing targets due to declining tax receipts, we see no evidence to change our “rates lower for longer” view.

Outside of Europe, the US is leading the way with job creation and according to the Federal Reserve’s Janet Yellen that comes with the prospect of an earlier interest rate rise and in Asia it is India that leads the way with growth at its fastest rate in 2 years. Elsewhere, Brazil has slipped into recession and Japans economy has shrunk the most since 2011 following an increase in VAT.

Finally, as an economic indicator, the world shipping of cargo has increased by 40% in the last month, which is either a temporary blip or a real sign of a global economic recovery.

GBP future inflation expectations expressed through 20 year Inflation Swaps range this month was a low of 3.43%, a high of 3.52% and a closing at 3.44%

This month we overlay the historical movements of 5 Year GBP Interest Rate Swap Yield versus the GBPUSD FX rate. 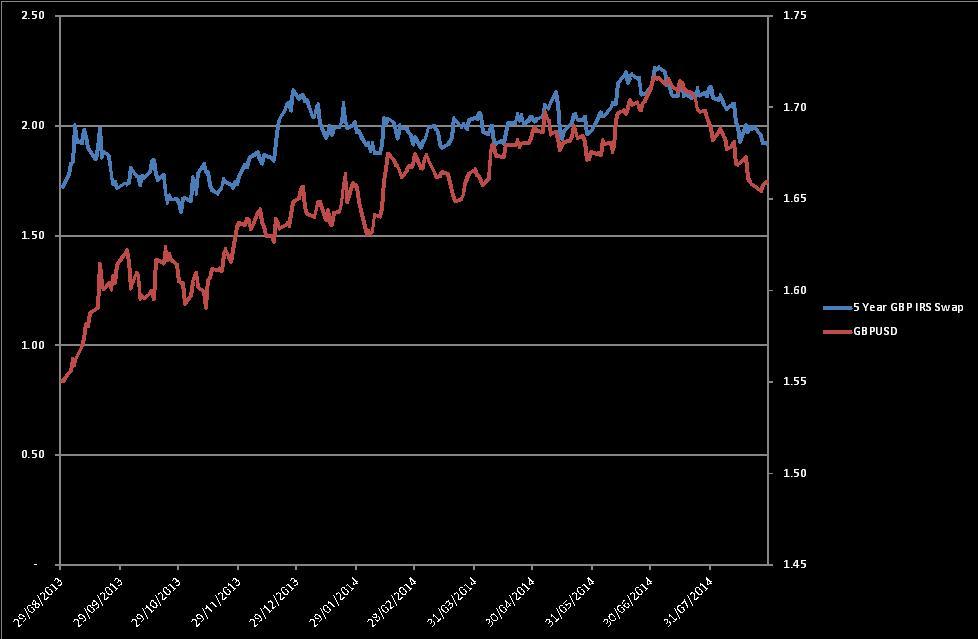