Who would have predicted that Leicester City bottom of the Premier League at Christmas 2014 with only 10 points from 17 matches would not only escape relegation but would top the Premier League at Christmas 2015? There were not that many either that forecast a Conservative majority Government as a possible outcome in the “closest UK general election for a generation” or that it would take the US Federal Reserve the whole of 2015 before it raised interest rates for the 1st time in 10 years!

The Fed, along with the other major central banks, has been playing keepy-uppy for as long as possible to keep the financial system from hitting the floor so now that they have chosen to play ball again it will be interesting to see if they adopt a defensive or attacking philosophy. If jobs growth and inflation continue to rise then expect to see a steady series of rate rises however, with a strong currency and the impact of slower growth in China impacting US manufacturing and exports, US rates may have to remain lower for longer.

At the top of the GDP league table of advanced economies it is the UK that is setting the pace buoyed by consumer spending as a result of low inflation and falling oil and gas prices. Although the formation of the UK economy has many similarities to the US, its banking system has not recovered as robustly as the US and our major trading partner the EU continues to struggle so the Bank of England is unlikely to follow the Fed’s lead in raising interest rates. That said, the biggest game changer for the UK will be the referendum in Q2/Q3 on membership of the European Union, which will not only impact our future relationship with the EU but could also precipitate a break-up of the UK and fragmentation of the Eurozone.

Finally, the star player of recent years has undoubtedly been the Chinese economy however a lack of form over the last year has had a knock on effect and the outlook for 2016 indicates no immediate return to the glory days. It may even be the case that we can now predict that when China sneezes the rest of the world catches a cold!

Whatever the predictions for 2016, we wish all our readers a happy and successful New Year.

Graph of the Month - The graph shows where the expectations for 3 Month GBP LIBOR (through Futures) were at the beginning of Jan 2015, in comparison where 3 Month LIBOR actually fixed in 2015 and the closing expectations as of 31 Dec 2015. 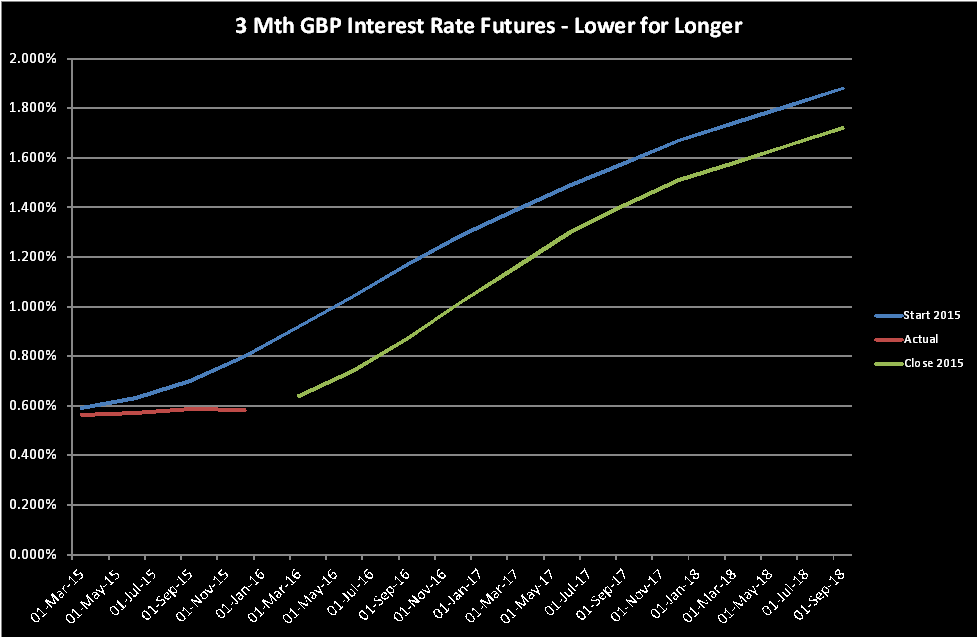