Uncertainty is very often the driver of market volatility and the last month has clearly demonstrated that. Will the UK vote to leave the EU, will the EU implode over immigration, will Donald Trump become the leader of the free world, is China squaring up for a fight over territory in the South China Seas and have the central banks run out of ways to stimulate their economies? All these questions have had a bearing on the direction of the markets at some stage this year but “project fact” is clearer than “project fear”!

In addition to the migrant crisis and the potential of a Brexit, the Eurozone’s economic woes continue unabated as it once again enters a deflationary period as manufacturing and production slows and prices fall. Greece is back in recession with Italy and Portugal not far behind. With near neighbours Sweden cutting interest rates to minus 50 basis points and the Bank of England Governor saying that he could cut rates to zero (but not below) if necessary, it’s no wonder that the ECB has said that it will not hesitate to provide further monetary stimulus by purchasing more bonds.

The potential impact of a Brexit to the UK will be subject to much debate over the next 4 months but the markets have reacted with GBP falling 10% against the €uro so far this year and 5 year GBP swaps hitting a new low of 0.836%. The interest rate markets are currently forecasting no rate rise until 2020 as the inflation outlook remains low throughout 2016/17. With rates remaining low consumers are out spending money (up 5.2% year on year) and borrowing, with unsecured lending growing by the most in a decade.

Retail sales in the US remain solid and car sales continue to boom (Fiat Chrysler up 12% and Ford up 20% in February) for the 71st consecutive month. Inflation has started to creep up slightly rising 0.3% in the last month, add to that a revision to the Q4 GDP from 0.7% to 1.0% and there is some light in the global economy!

It’s no wonder that Lord Rothschild has cautioned that we may be “in the eye of a storm”!

Our Graph of the Month shows the markets perception that rates will stay "Lower for Longer" - we look at the 10 Year historical movements of 50 Year GBP Swap rates. 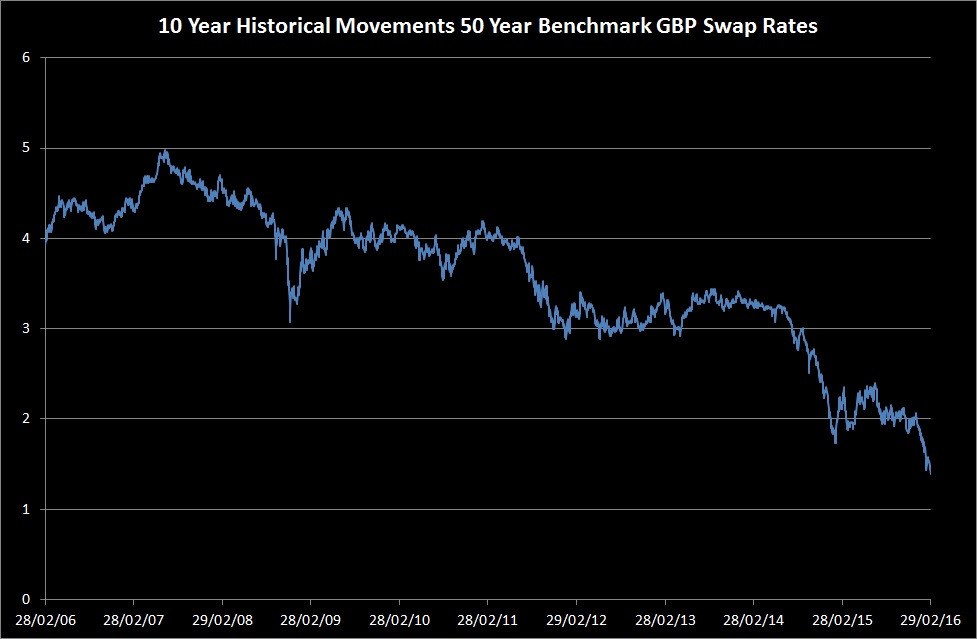