The COVID-19 virus and the prospects for containment or risk of global pandemic is front and centre for world markets. There is considerable debate as to whether this represents a demand shock or supply shock, in our view it's more likely both. There is little debate that global supply chains are being impacted by the ongoing factory shutdowns (or partial openings) in mainland China. However, as more cases begin to emerge in more developed economies such as South Korea and recently Italy, the potential impact becomes more palpable for both business output and consumer confidence. A paper from the London School of Hygiene and Tropical Medicine suggests the effect of a pandemic with a low fatality rate of 0.4%, is to reduce GDP by 0.5% to 1%, depending on an infection rate of 25-50% of the population. However, the economic effect doubles or triples nearer to 2% of GDP if schools are forced to close for 2-4 weeks, primarily due to a significant number of mothers now being part of the labour force when compared with historical influenza pandemics. In the event of a full pandemic such risk parameters could apply across large swathes of the developed world, highlighting how economic downside risks can be significantly greater than the threat of acute infection/mortality.

Global central banks are well versed in responding to demand side shocks via the monetary transmission route of simultaneously driving down interest rates for borrowing (policy cut) and supporting asset prices (QE). However, supply side shocks are much harder to deal with, especially if they pose an asymmetric risk to the growth versus inflation trade-off (e.g. 1979 and 2008 oil shocks). The theoretical response by central banks to a supply shock should be one of a wait and see approach, firstly as to how persistent it is likely to be then whether the restriction in supply coincides with weaker demand, or whether demand remains sticky and drives up prices.

In the post finanical-crisis era of subdued demand growth asset markets have come to rely on persistent central bank stimulus for the vast majority of their gains, with reported earnings relegated to a somewhat subsidiary element. Until recently equity markets were taking the view that the impact would be short term (say up to 3 months) with minimal spillover effects, however, this has now transcended into a simultaneous decline in global equities and government real yields as fears grow over a more prolonged economic impact. This leaves policy expectations for the world’s major central banks skewed towards further easing. The Federal Reserve, ECB, BOJ and BOE are all expected to cut policy rates one or two times by the end of the year according to market prices (see chart overleaf). But with policy rates already close to or below the zero bound, fiscal policy or emergency relief measures may be required to do more of the heavy lifting if the risk of an outright contraction in growth becomes unambiguous.

As a footnote and obviously unrelated to the coronavirus outbreak the U.K.’s Institute of Health Equity says U.K. life expectancy has stalled for the first time in more than a century, with part of the blame laid on the country’s post-crisis decade of austerity and stagnant real wage growth. As the U.K. government gears up for both the impact of and policy response to leaving the EU, this could be seen as one of the contributing factors in the so called “levelling up” Budget on March 11th. 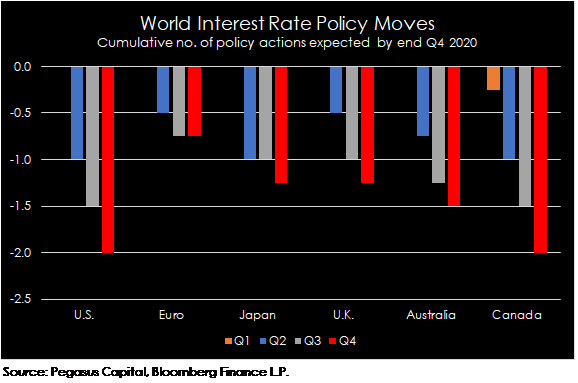