Down, down, deeper and down, but this is no Status Quo, it’s about who can afford to devalue their currency the most! In the latest twist, Japan having pretty much exhausted its other efforts to stimulate growth and get some inflation back in the economy, announced negative interest rates joining Switzerland, Denmark and Sweden. As Central Banks run out of options, negative interest rates should weaken their currency making their exports more competitive and should encourage more people to spend money given that it will be worth less in the future.

Down too went Chinese manufacturing for the 5th month in a row as did China’s GDP which fell to 6.9%, the lowest since 1990. The knock on effect can be seen in the demand for commodities as copper zinc and nickel demand fell to a 12 year low. In addition, the reduced demand for oil combined with production from Iran likely to come on stream and record inventories (US inventories at their highest for 80 years) saw the oil price at one stage dip below $28 per barrel.

Down went global stock markets as a result of the Chinese slowdown with many recording 10% falls in the first month of the year and the likes of London, Tokyo and Shanghai markets entering “bear” territory. Several large institutions like UBS, SocGen and RBS adjusted their outlooks to negative with predictions of a 20% fall in stock markets and a drop in the oil price to $20 per barrel or less. With global food prices dropping by 19% in 2015 and oil prices at or around their current levels, it looks like the Central Banks will have their work cut out trying to create inflation!

What then for interest rates? Expect them to remain lower for longer in the UK and don’t be too surprised to see the US Federal Reserve perform a volte-face.

Fact of the month: there are now $5.5 trillion of Government Bonds outstanding with a negative yield.

GBP future inflation expectations expressed through 20 year Inflation Swaps also moved lower through the month, opening at the high of 3.43% and closing at the low of 3.29%.

This month's Graph of the Month compares the historical movement over the last 2 years of 5 Year Government Bonds. 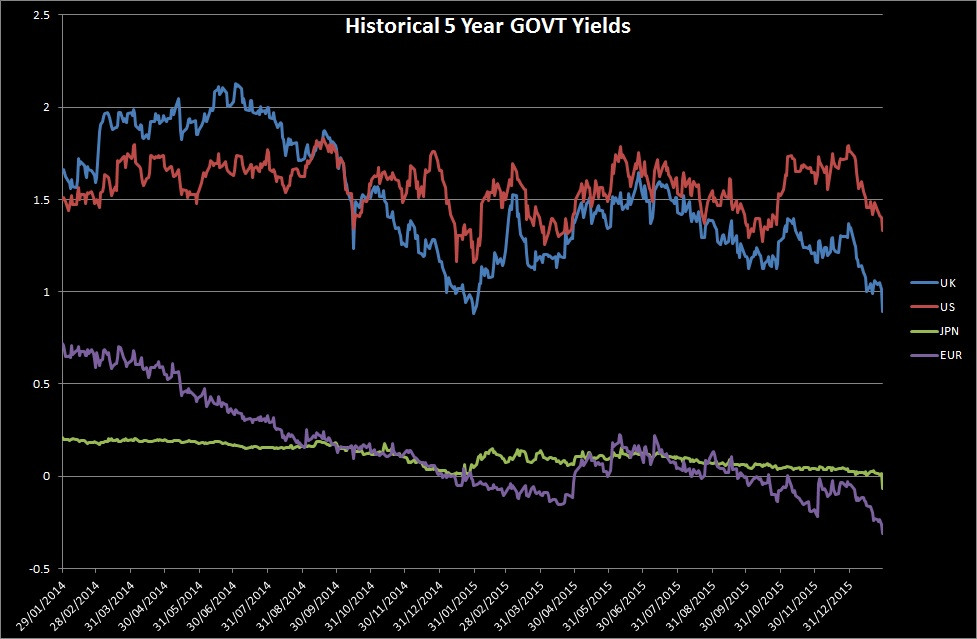