A new year and a new political landscape is dawning. The consequences of electing Donald Trump as President, voting for Brexit and the elections in Europe will undoubtedly take centre stage this year. As usual we will try and avoid the “fake news” and the spin doctors and concentrate on the fiscal reality!

The depreciation of GBP certainly helped boost the UK economy as growth in manufacturing, construction and industrial production resulted in UK growth of 0.6% in Q4 again putting the UK at the top of the G7 leader board with annual growth of 2%. This resulted in the IMF and the Bank of England revising their growth forecasts for 2017 to 1.5% (1.1%) and to 2% (1.4%) respectively. That said, with inflation hitting a 2 year high of 1.6% and forecast to hit 2.8% in the first half of 2018 and the impact of Brexit yet to filter through, the outlook for medium term growth prospects remain subdued. If inflation increases faster than anticipated and growth exceeds forecast, there will be pressure to raise interest rates towards the end of the year however, with little sign of wage growth and consumer debt at record levels there is no need to rush!

In the US, earnings have been climbing at the fastest rate since 2009 as productivity has increased and the economy grew (1.9% in Q4). The promise of economic stimulus from the new administration saw the Dow Jones exceed 20,000 for the first time however the Fed remains somewhat cautious on the outlook for rate rises and is keeping a watchful eye on the real impact of the Presidents executive orders. We do anticipate a further rise in rates this year but like 2016, just not too quickly.

Meanwhile the “Bhurgers” of the Eurozone have declared that the most significant threats to their future are existential, with the potential impact of the new US President’s policies and the negotiations for Brexit being the primary causes for concern. With EZ GDP rising to 0.5% in Q4 (1.8% annual), inflation picking up to 1.1% in December (0.6% Nov) and the ECB cutting back its bond buying programme by €20bn from April, it would appear that they may be back on track, however the Bond markets are sensing mounting political and fiscal risks, which is causing a divergence in intra EU sovereign credit spreads (see graph below). With potential turmoil ahead we see little scope for any change in interest rates this year. 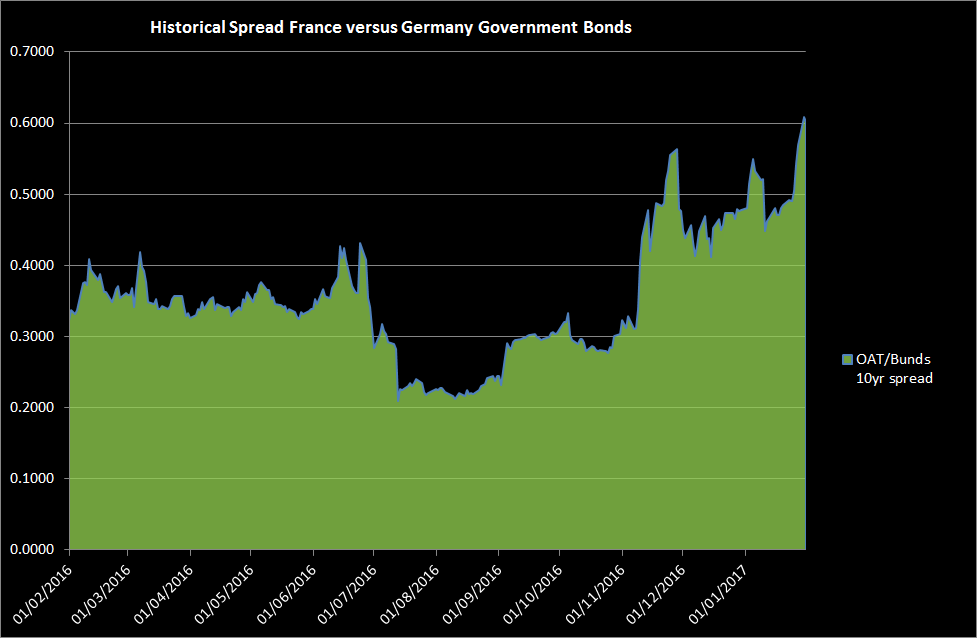