Data output for July was never going to be anything but dramatic after the Brexit result but it wasn't the UK grabbing the headlines. US seasonally and inflation adjusted annual GDP growth of just 1.2% in Q2 was the weakest pace in any expansion period since 1949! This was at odds with some of the more positive news as consumer spending remains strong, home sales have hit a post-recession high and 287 thousand new jobs were added but reduced business investment, large reductions in inventories and declining Government spending have clearly knocked economic output. The likelihood of a September rate hike has reduced to 12% and US long term rates have hit the lowest in their 227 year history.

A rate reduction was on the cards for the UK this month but the MPC decided there was not enough information to warrant a cut but the signals are that an August rate cut is likely. With UK consumer confidence dropping at the fastest rate since 1994, corporate confidence at its lowest level since 2008 and the economy shrinking at the fastest rate since 2009 the signs are that a recession looms despite the UK economy growing by a better than expected 0.6% in Q2 before Brexit. The IMF also cut its forecast for UK GDP dramatically from 2.2% to 1.3% for 2017, although that's still better than Germany, France and Italy. For the Eurozone the IMF cut its forecast to 1.6% for 2016 and just 1.4% for 2017 as well as cutting its inflation forecast again to 0.2% (0.3%) rising to 1.1% for 2017 and 1.2% for 2018.

With the ECB and the Bank of Japan estimated to be buying $180bn of securities a month it was no surprise to hear that the Bank of England was also contemplating a corporate bond buying programme. This will only exacerbate the decline in returns as investors are forced to buy longer dated debt to get some yield (the recent 2068 UK index linked bond had a negative real rate of -1.32%). This also compresses the difference between short and long term yields which traditionally is an accurate prediction of economic recession. It is also bad news for banks as is being played out in Italy in particular but also across the rest of Europe and Japan and causes real problems for pension funds and insurers alike as long term bond yields diminish. There seems little chance that the Central Banks are going to change tac any time soon so we expect to see a continuation of the this theme for some time to come.

Fact of the month: Norway currently has the highest inflation rate of the developed nations at 3.7%.

GBP future inflation expectations expressed through 20 year Inflation Swaps ended lower on the month, opening at 3.16%, with a high of 3.17% and closing at the low of 2.99%. 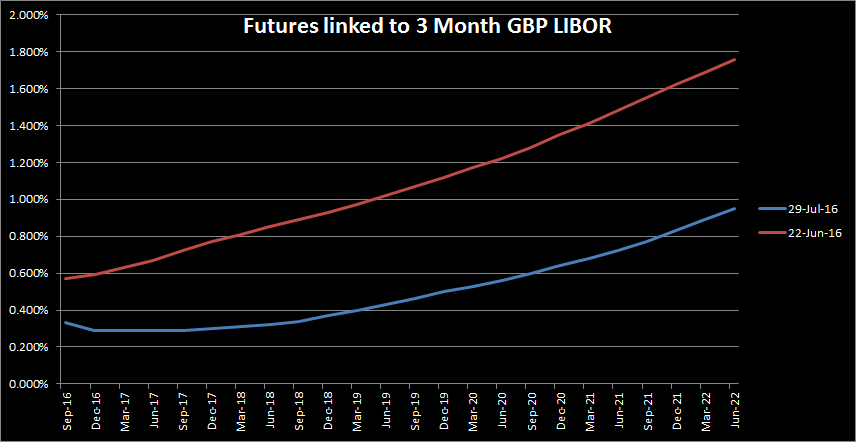