The primary driver of the recent rise in UK swap rates has been a more hawkish tilt from certain members of the Bank of England’s monetary policy committee. This has been predicated on more recent inflation outturns coming in above levels anticipated when the BOE last published its quarterly inflation forecasts in early May and that CPI will rise above the 3% level in the coming months before moderating as past effects of foreign exchange rate weakness work their way through the economy.

Most committee members still expect the inflation surge to be transitory and therefore envisage inflation returning towards its target of 2% by the end of 2019. However, over recent weeks a couple of officials, including the bank’s chief economist, have voiced concerns that the stimulus added in the aftermath of the Brexit vote should be taken back, e.g. bank rate moving from 0.25% to 0.5%. For these members of the committee their concern rests on the fact that unemployment is at record low levels and if inflation expectations were to become entrenched then there could be adverse long-term consequences. It is worth noting that in the context of longer dated swap rates very few of these officials are talking about a series of rate increases but simply unwinding the 25bp cut from last August.

Even if the BOE went ahead with a rate increase we do not see a prolonged rise in long-term interest rates in the near future. We believe that uncertainties surrounding household consumption need to be offset fully by export growth and business investment for the economy to be able to absorb any increase in borrowing costs, a high hurdle given the intensification of Brexit negotiations. As things stand, the market prices in a near 70% probability of interest rates rising by the December MPC meeting, which is quite a significant risk premium relative to the fact that the committee remains quite divided over the economic outlook.

There has been a secondary effect on longer-term swap rates which has been more a function of global rate dynamics. The President of the ECB, Mario Draghi, has recently sent subtle signals about reducing the pace of QE purchases if the Eurozone economy sustains its recent pace of expansion. However, there is a common misconception in the markets that this is a signal of tighter monetary policy. This could not be further from the truth, a reduction in QE purchases simply reduces the pace at which monetary policy is being loosened; tightening can only occur if interest rates rise or the central begins unwinding its holdings. We are still a very long way from such a scenario in the Eurozone. Nonetheless, the market has reacted by increasing 5-year European swap rates by approximately 25bp and this has had a follow-through effect upon similar maturity UK rates, which have increased by a similar margin. 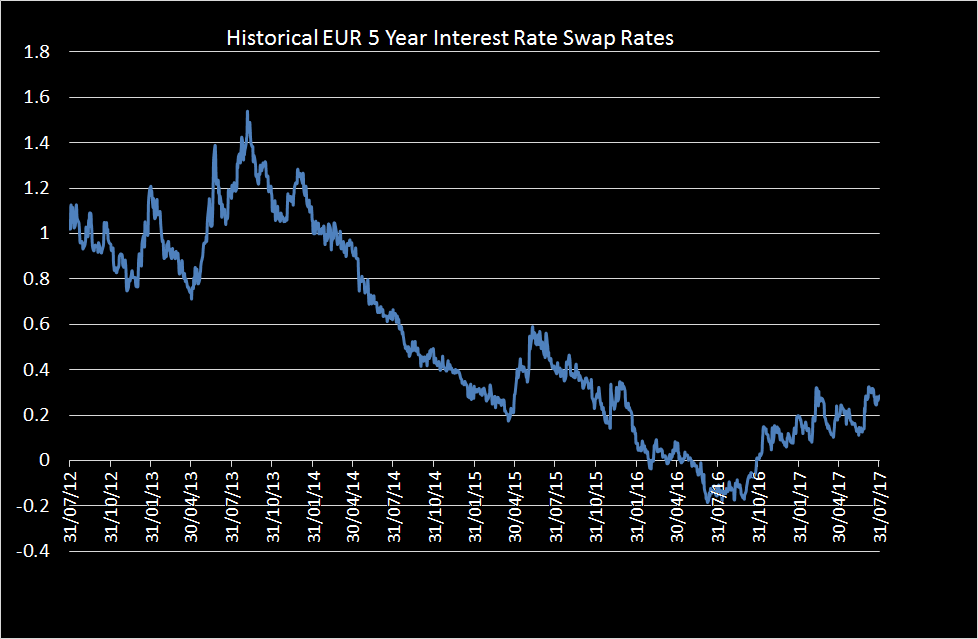