They think it’s all over……well for Portugal, Italy, Greece and Spain it as far as the World Cup is concerned, but are they out of their current economic troubles? Across the Eurozone the answer is still no as GDP rises just 0.2% in Q1. Within the overall figures, all but Spain of those mentioned above had any sign of growth, with the others experiencing continued decline. With inflation coming in at just 0.5% for the previous few months, the ECB took remedial action by reducing interest rates to 0.25%, cutting the deposit rate for banks to -0.10% and making €400bn of cheap loans available for small businesses. Although no further action is expected by the ECB this coming month, many observers still believe that they will ultimately have to implement a QE programme to tackle the risk of deflation.

If you are looking for confidence over ability, then the US team is certainly the one to pick as the coach Jurgen Klinsmann has told his players to change their return flights until after the World Cup final! The same could be said of the US policy makers who have continued on their path of tightening monetary policy, confident that with employment levels reaching a pre-crisis peak and factory growth hitting a 4year high, their ability to manage an orderly withdrawal of fiscal life support would be painless. Unfortunately, worse than expected Q1 GDP figures of -2.9% v forecast -1%, consumer confidence ebbing and housing market activity at its lowest for 14 years has, amongst other things, led the Federal Reserve to cut its own annual growth forecast from 2.9% to 2.3%.

It’s a shame that there is no direct correlation between the performance of the UK economy and the performance of our only representative at the World Cup, England. If there was, we would have been favourites to win the whole contest as UK employment rose at the fastest rate for 43 years, the UK economy passed its pre-crisis peak and analysts are now predicting UK growth of 3.4%. The improving economic climate has caused intense speculation on the future path of interest rates this last month with the BoE Governor at first saying that markets should be prepared for a rate rise this year then qualifying that with the need to take up any spare capacity in the market. With UK inflation at its lowest for 5years and signs that the housing market may be cooling, any rate rise may just be postponed until next year.

GBP future inflation expectations expressed through 20 year Inflation Swaps again traded within a tight range over the month opening at the low of 3.55% and closing at 3.60% 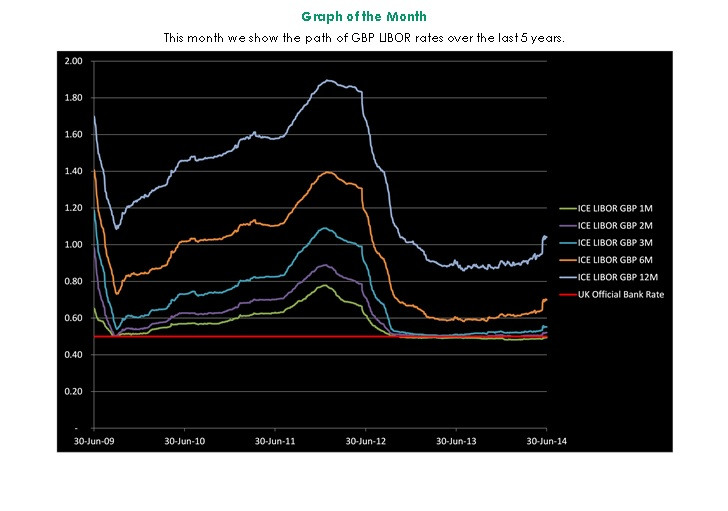