What a way to devalue your currency and lose your AAA rating! It may be a case of batten down the hatches and wait for the storm to pass but many will see the volatility in the markets as an opportunity to lock in long-term funding at historically cheap rates. With the 10 year UK Gilt trading at historical lows having broken through the 1% barrier and 5 year swaps going through 0.5%, borrowing is certainly cheap. However, after the remarks by the Bank of England Governor Mark Carney on the 30th June more easing is a real possibility and the UK may join the other countries that already have 0% interest rates…..or lower!

The capital markets may now move from rate watching to inflation watching. Within the sharp decline in the headline interest rates, it is the dramatic fall in real yields that catch the eye as inflation expectations pick up on the back of a weaker GBP. Real or inflation-adjusted 5 year borrowing rates have fallen to negative 2.5% so those that are borrowing at Libor plus a spread of 2.5% or less have a real funding cost of zero % or below.

In the other major vote that we mentioned last month discretion was the better part of valour as the US Fed remained cautious on the potential impact of Brexit and domestic uncertainties around the economy. Post the Brexit vote 10 year US Treasuries have traded at new record lows reaching levels last seen in 2012. In further signs of slowing momentum in the US economy US interest rate futures have pushed out any expected rate rise until after 2017 a far cry from the staggered interest rate rises that were envisaged for 2016 at the start of the year.

In Europe the 10 year German Bund has already gone negative, reaching its lowest level since 1807! This means that there is now $11.7tn of sovereign debt in the global market that carries negative nominal interest rates, an increase of $1.3tn in the last month and which includes $2.6tn of long-term bonds with a maturity of more than 7 years. With just $2tn or so of bonds yielding more than 2% it is no coincidence that alternative asset classes continue to benefit from investors looking for yield.

Our Graph of the Month looks at how GBP 10 Year Real Rates have dropped. 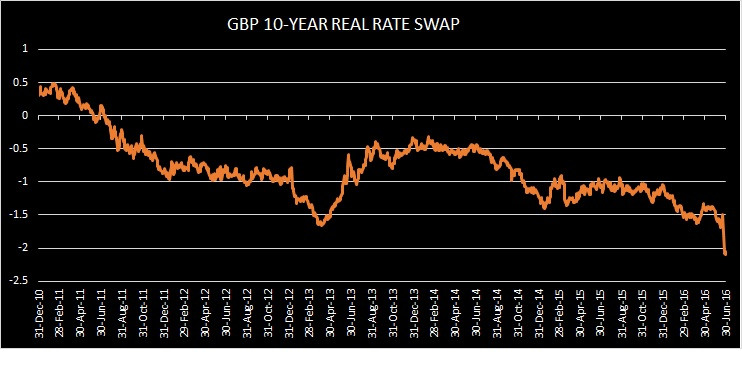