It’s happening all over the world from Japan to the US to the UK, official inflation has reached 0% on an annualised basis. The only exception has been the Eurozone where inflation is still in negative territory at -0.3% however, this should edge up over the coming months as the effects of the Quantative Easing programme from the ECB kick in. As the German Dax climbs to an all-time high, business confidence rises and there are some signs of growth across the Eurozone, the only matters to address are the potential of a Greek exit and a weak currency as the Euro hits a 12 year low against the US$. For some countries in the EU but not using the Euro there were steps taken to protect currencies versus the weaker Euro with Poland reducing its benchmark rate to a new low of 1.5% and the oldest central bank in the world the Riksbank in Sweden dropping rates below zero to -0.25%.

It is the strength of the US$ that is storing up a few problems as the IMF warns that a US interest rate rise could trigger instability in the emerging markets. Whilst the job market remains buoyant with a further 212,000 jobs being added, the strength of the currency has resulted in a slowdown in manufacturing and a potential delay to an interest rate rise. In addition, a downward revision of the GDP figures to 2.2% from 2.6% for 2014 could result in the Fed just keeping their finger on the trigger for the moment.

Of all the major economies there is no doubt that the UK was the shining star for 2014 as the GDP figure were revised upwards to 2.8% from 2.6%. UK factory output hit a 7 month high but the strength of GBP has hit exporters and forward order books signal a slowdown in Q2. That said the UK trade deficit is at its lowest since 2000 on the falling oil price and UK shop prices are falling at a record pace according to the latest retail survey. With long term rates at a record low (the new 53 year Government Bond yielded 2.62%) it’s no surprise that mortgage approvals continue to rise and that the FTSE has passed the 7000 mark.

Finally, the BIS, the OECD, the Fed and the German Finance Ministry have all warned this month that low interest rates threaten financial and potentially civil stability due to unsustainable asset bubbles and the potential for another credit crunch! Scary as that thought might be, we now have 5 weeks of political points scoring to put up with, which is even scarier!

This month we compare the historical movements of 20 Year GBP Interest Rate Swaps & 20 Year GBP Inflation Swaps, we also include the running spread which, as can be seen, is trading at its recent historical wides. 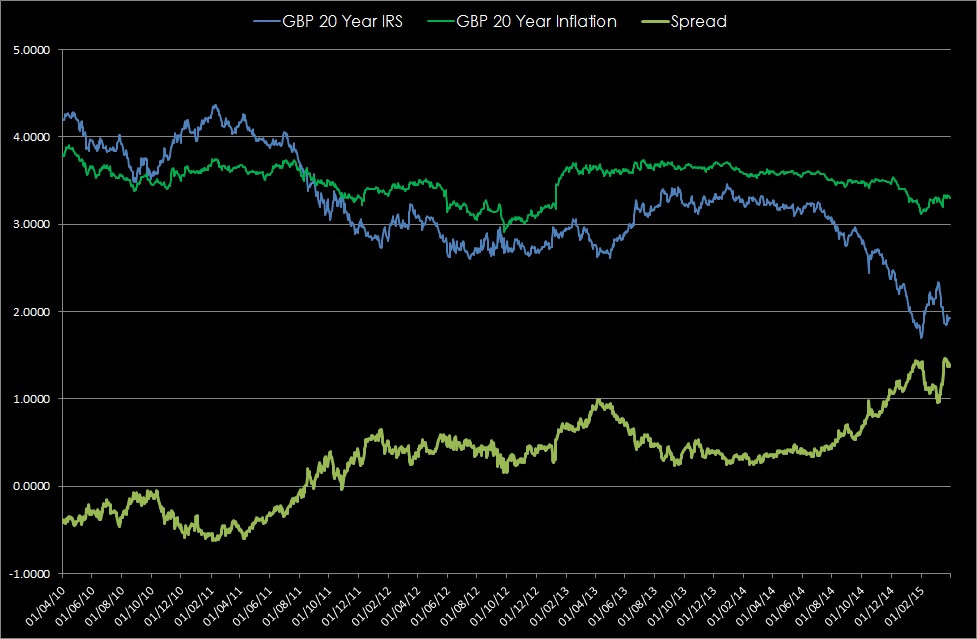