This morning’s announcements from the Bank of England cannot in any way be tagged as not going far enough as a pre-emptive response to a potential national and global emergency. The combination of a 0.5% cut in base rates, the establishment of a term funding scheme with additional incentives for SME lending (including access for non-banks ) which could exceed £100bn of net lending, and the reduction in the counter cyclical capital buffer to 0% from 2% (max effect 13x 2019 net lending) are substantial easing measures and have been explained very effectively with the double-act of Mark Carney and incoming governor Andrew Bailey during the press conference.

Bear in mind that these measures will run alongside the fiscal policy response, for which early indications from the new government have been in the vicinity of £500-£600bn of new capital and infrastructure spending by 2025. Assuming Chancellor Rishi Sunak looks to front-load a little more of that in terms of emergency contingencies, the UK economy should be supported by a substantial level of stimulus in the now likely event that the economy moves into a temporary phase where economic activity contracts.

The BoE still has room to cut rates a little further before hitting its current assumed 0.1% interest rate floor. However, today’s announcements in terms of offering direct lending at bank rate, and reductions in the counter-cyclical buffer, will make it easier, even if there is initial reluctance, for the BoE to take rates into negative territory later this year if the economic situation deteriorates further and inflation expectations remain suitably contained. It is worth noting that when responding to a reporter’s question, the incoming governor said the BoE has used about half of the 250bp of potential stimulus that was cited by bank officials in prior testimony to the Treasury Select Committee. The remaining ammunition would certainly include more QE before we see the BoE visiting negative rate territory.

With this in mind, and the likely fiscal stimulus, it would be difficult to argue against UK nominal and real yield curves gradually building in a steeper term premium, but the immediate market volatility warrants such scenarios being examined on a more micro/contingent optionality basis, as there is nothing to prevent an ongoing yield grab in long dated low risk assets in the very short-term as investment portfolios respond and adjust to the initial valuation shock. The policy measures announced today are there to cushion the ongoing effects on markets as opposed to immediately reversing them. Monetary policy actions which occur beyond UK shores will also continue to impact international capital flows.

There is no panacea to the situation we face from fiscal or monetary policy actions. That can only come from the eventual discovery of a vaccine for CoVid-19. However, it would be remiss to try and be contrarian and argue that not enough is being done at the monetary or fiscal policy level at this stage of the evolving virus epidemic. 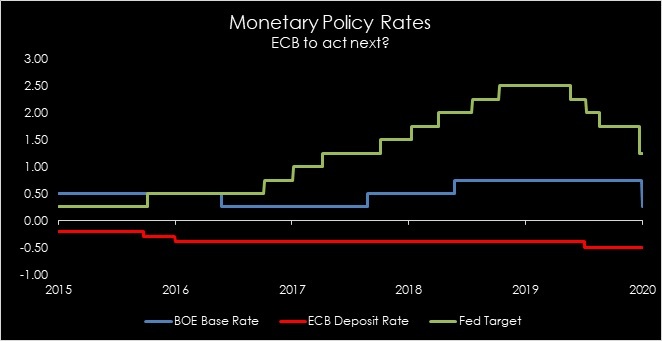