The current global economic picture is a real mixed bag with a different picture everywhere you look.

Worries in China about the property slump dragging down the whole economy and fears of deflation as price rises slowed sharply, were tempered by the more positive news coming out of Japan with inflation reaching a 23year high. Delving a little bit behind that headline and you find that most of that was the impact of a new sales tax and that underlying inflation is more like 1.5%. With Japanese output falling 2.5% in April you can see why the IMF is calling for more reforms.

In the Eurozone the overall economy continues to stagnate with only growth in Germany offsetting the continuing decline in France and the slump in the Netherlands. That said, with German investor and manufacturing confidence at a low for the year and unemployment rising the most in 5years, there is more and more pressure for some sort of economic stimulus. From recent comments by the ECB and the OECD don’t be surprised if we see some monetary loosening in the month ahead.

In the US where the FED is doing the opposite and tightening monetary policy, the jury is out as employment rises and housing starts jump, yet retail sales have slowed and the US economy as a whole shrank 1% in Q1. At the moment the Fed is blaming the weather so Q2 will be the real barometer of underlying growth.

The brightest spot on the economic canvas remains the UK which continues to power away with manufacturing at a 15year high of 1.4% in Q1 and retail sales and the whole UK economy growing the most in a decade. The Bank of England continues to dampen rate rise speculation, but for how long?

GBP future inflation expectations expressed through 20 year Inflation Swaps traded within a tight range over the month opening at 3.60%, with a low of 3.54% and closing at 3.55% 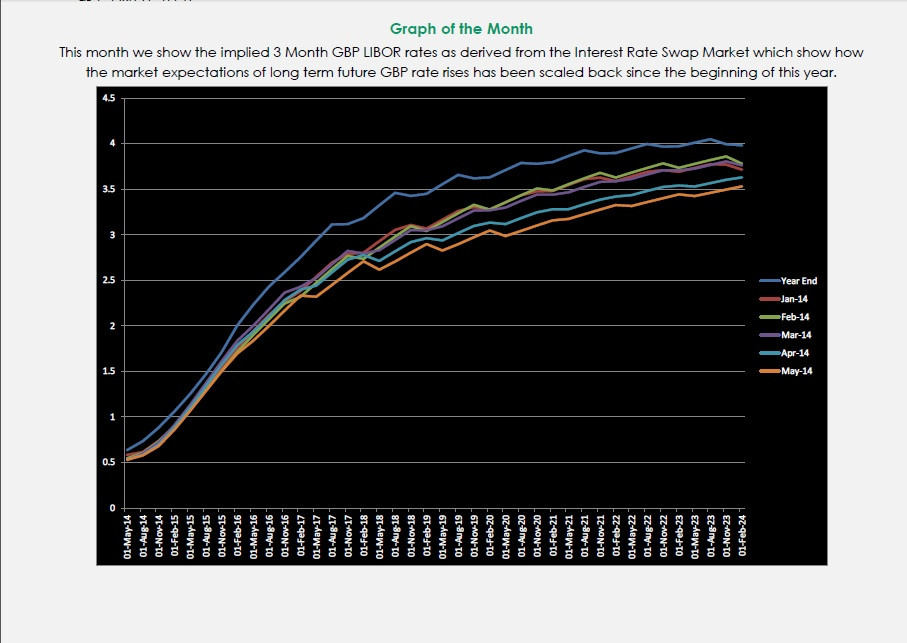