The Bank of England left interest rates unchanged at its May meeting. Markets had largely written off any probability of an increase following the BOE Governor’s BBC interview in late April where he alluded to weaker Q1 growth and Brexit uncertainty delaying the prospect of higher interest rates. The inflation report itself provided very little in terms of guidance as to the timing of the next interest rate increase, forecast inflation was revised down slightly due to the lower than expected outturns since the last forecast round. Weaker growth in Q1 was expected to spill over into Q2 with the long-term trajectory broadly unchanged, whilst unemployment was expected to remain close to 4% over the three-year horizon.

Domestic considerations took backstage as political upheaval in Italy returned, the two populist parties had reached an agreement to form a government but their nomination of a Eurosceptic as finance minister triggered a Presidential veto. The prospect of new elections was perceived to increase the risk of an even greater populist swing and thereby present more of a challenge to Italy’s Eurozone membership. Markets reacted abruptly with 2-year Italian yields rising almost 300bp from end April levels to reflect heightened credit risk fears. With financial markets sending a very strong warning signal to the new populist leaders there was some backing down and a government was eventually formed with a more moderate choice for the Italian Treasury. At the same time the Spanish PM Mariano Rajoy was challenged in a no-confidence motion over party corruption, the challenge carried and Pedro Sanchez took over as leader despite his own party having a minimal number of seats and requiring support from pro-independence Catalan members, suggesting elections may not be too far away. With Italian and Spanish political uncertainty put into temporary sedation, markets found relief and spreads tightened, but still remain elevated with respect to recent norms.

UK 5-year swaps fell from 1.27% to 1.15% over the month, with rates at one point close to unwinding all the year’s rises as risk aversion over Italy spiked and UK Gilts benefited from their safe haven status. The market ended the month pricing in just a 1 in 4 chance of a hike in August with a full 25bp increase in base rate not priced until May 2019. A bounce back in the growth and spending data is anticipated in June but much will also depend on any Brexit progress or lack thereof at the EU summit on June 28-29, and the ongoing fall out of the populist government taking shape in Italy. 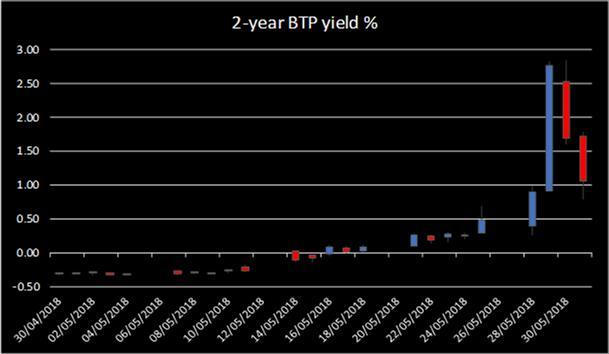