On May 2nd the Bank of England will publish an update of its forecasts for the UK economy. Since the last update in February the UK has delayed its official departure from the EU from March 29th until October 31st 2019. Further, UK parliament has approved legislation that seeks to prevent a no-deal Brexit from occurring, although there are residual permutations which could still lead to such an outcome.

The delay to Brexit, whilst reducing the immediate economic risks of a no-deal scenario, has increased domestic political uncertainty to the point that the tenure of the Prime Minister is now considered in months (if not weeks) if parliamentary approval of the EU withdrawal agreement cannot be reached. Any subsequent leadership campaign is likely to be along divisive hard or soft Brexit lines and is seen by many as portending the need for a general election in the event that the governing party fails to coalesce around its new leader in terms of supporting primary legislation, given the already tenuous confidence and supply agreement with the DUP.

The economy has been quite resilient to these pervasive uncertainties. First quarter growth could come in marginally above the Bank’s February projection, unemployment/employment remain near record lows/highs respectively, and wage growth continues tracking at its strongest levels since the financial crisis even if the acceleration seen at the end of last year is now plateauing. Nonetheless, problems still lurk in the supply side of the economy with investment spending subdued, residential housing surveys weak and labour productivity barely above zero. Inflation pressures generated by the depreciation of the pound have now passed and it seems likely that inflation will oscillate around the 2% target over the course of the year. Higher oil prices and an increase in household energy tariffs have delayed the risk of a significant undershoot for now.

The anticipated outcome for Q1 activity is partly attributable to the advance purchase of excess inventories to protect against no-deal risks on March 29th, therefore it is likely that these stocks will be run back down in the second quarter. Therefore sustaining a similar pace of growth over the next 6 months will hinge more upon consumption and investment, while government outlays should be more supportive than in prior years as austerity pressures begin to ease. The international backdrop has steadied since the end of 2018 with central banks playing a major role in announcing explicit delays to the prospects of monetary tightening, which has supported a recovery in global equity valuations and risk appetite.

The UK rates market has been fairly rangebound over the past month. Expectations for further tightening this year have ticked a little higher following the delay to Brexit and sit near 20% probability for a further 25bp hike by December. These probabilities were closer to zero shortly before the March 29th Brexit deadline. LIBOR fixings have continued falling back after being driven higher on the back of funding uncertainties early in the year. 3mth and 6mth LIBOR ended the month at 0.81688% and 0.94188% respectively. Longer term 5-year rates currently sit at 1.10%, increasing from a low of 0.95% on March 22nd, the term premium of just under 30bps versus the spot fix is still towards the low end of its historical range under the presumption that the economy avoids recession over the next 12 months.

In summary there are reasons for a more optimistic UK growth outlook over the next three to six months. But Brexit still lurks in the shadows, the Halloween deadline is a suitable spectre to those risks. The Bank of England may attempt to send a message of near term optimism, perhaps steering the market towards a slightly higher probability of another rate increase in 2019, but we still see the likelihood of an actual increase in rates as remote until current Brexit uncertainties are resolved. 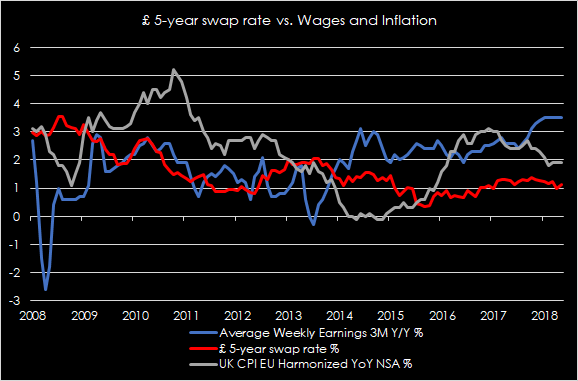