Mulling over the BOE’s policy decision and economic outlook, over cornflakes, coordination of Joe Wick’s workout and the preparation of the children’s home schooling schedule, is a new experience for us all. It is pretty clear from this morning’s statement that the modelled outcomes are quite disparate and calibrating policy around it is akin to playing darts with a blindfold. The BOE’s central assumption that the economy could return to its previous size by the end of next year is welcome, but not as positive or relieving as it sounds, simply because of the sheer scale of fiscal and monetary stimulus that is being injected into the economy to deal with the immediate phase of the crisis. The BOE is clearly assuming none of this stimulus is unwound over the forecast horizon, and excess capacity in the labour market could remain substantial. It is understandable that the BOE want to send a message of positivity as it is clearly in the national interest that they do so, if only to reinvigorate “animal spirits”. But in our view the balance of risks still remains heavily skewed towards further easing, and we cannot rule out a deflationary shock that drives the policy discussion towards negative rates in the coming quarters.

The starkest indicator of potential deflationary pressure came in the section where demand and supply were discussed in terms of their relative impacts on the economy. In as many words the BOE said the demand shock was likely twice as large as the supply shock. Further, if we look out over the next 6 months and the gradual easing of lockdown conditions, it is quite plausible that industrial output increases faster than consumer and investment demand, overturning the initial assumptions about a pending supply shock. Of course there will be ongoing bottlenecks in certain supply chains, and some areas may face more significant disruption. When we factor in the BOE’s assertion that China is now closer to 90% of operational capacity, the risk of excess supply becomes further elevated in terms of the import channel.

The BOE broached the subject of 0% CPI inflation in the coming months as quietly as possible in the report, focusing on oil prices and comfort from unchanged (technical) forward inflation expectations. The BOE dedicated a fact box to the difficulty of sampling prices whilst many sectors remain completely shuttered. The staff at the ONS clearly have a momentous challenge on their hand in terms of reporting April’s inflation rate. We would assume that a number of committee members are very concerned about the deflationary risks even if sampling issues mask it initially. The two members that voted for an additional £100bn of QE at today’s meeting perhaps had one eye on the calibration of policy to head off such outcomes. The BOE also noted that only a small minority of employers topped up the government’s 80% furloughed wage offer to 100%, suggesting that the risk of a substantial drop in demand is already in place amongst salaried workers even before the support scheme begins to be phased out in the coming months.

We were worried about disinflationary headwinds before the onset of Coronavirus pandemic. The global expansion was slowing, global trade flows had deteriorated, corporate debt burdens had risen significantly on the back of equity buybacks and leveraged trade-outs from prior private equity deals, with additional support from more relaxed loan covenants. Households had managed to repair their balance sheets somewhat over the decade following the financial crisis, but this was a case of fixing the roof as opposed to a full refurbishment. Global inflation was struggling to hit central bank target levels despite the maturity of the cycle as wage levels continued to defy the record low level of unemployment. If we are to take into account the BOE’s aforementioned assessment of demand and supply in conjunction with all the global stimulus measures announced to date, we do not seem anywhere near close enough in terms of fiscal intervention to deal with the likely hit to demand.

In summary, the risks of a deflationary outcome remain very elevated. The counter argument of acute supply side damage seems much weaker than it did at the outset of the pandemic, because the productive sector may be able to return to higher output levels under social distancing. Our understanding of likely household responses is becoming more informed, particularly with regard to genuine uncertainty, precautionary savings balances being built (where possible) and the likely consolidation of credit related debt. The epidemiological world is very worried about the risk of a second wave of infections. Social distancing and contact tracing will be used to mitigate that risk until a vaccine is discovered. Turning the tide on the risk of viral infection and saving lives is the driving policy of government, but by definition this just pushes another rising tide of shrinking demand onto the economy. 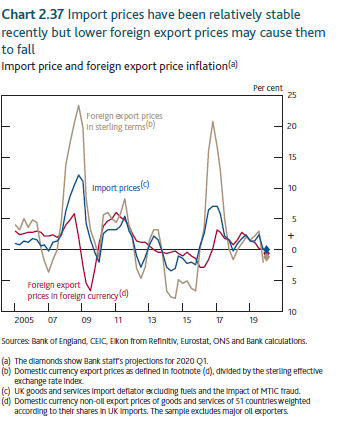 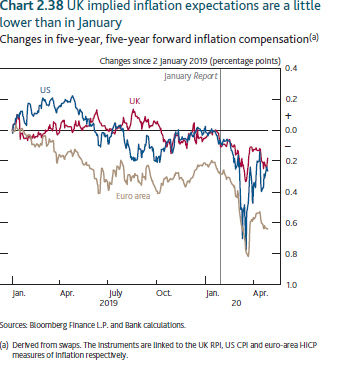