They say “money makes the world go round” and with the frenzy whipped up over black Friday and cyber Monday by those looking to encourage more consumer spending, it’s easy to see why one might think that. However, it looks like it’s really oil that makes the world go round or more precisely the oil price, which is currently having the most impact on the global economy. Oil prices have dropped almost a third to a 4 year low of $70 per barrel and the ramifications of that, both positive and negative, are likely to be the headlines in the year ahead.

In the US, imports of oil have hit a 30 year low as fracking increasingly fulfils domestic demand, which in turn has reduced manufacturing costs and helped the US economy add 214,000 jobs in October bringing the unemployment level down to 5.8%. No wonder Janet Yellen the chair of the Federal Reserve said at the beginning of the month that the US economy was strengthening and that subsequently US GDP for Q3 was revised upwards to 3.9%. On the back of this the US Dollar has hit a 4 year high the stock markets had a 46th record high of the year and the New York auction season set several records! This might be good news for those that own assets but it is indicative of the increasing wealth gap which is now the biggest since the great depression with the richest 0.1% of Americans owning the same as 90% of the general population.

The European economy which is mostly dependent on oil imports, should in theory be a substantial beneficiary of the falling oil prices but as we have seen this month, this is not yet feeding through into the figures. The European Commission has actually reduced its growth forecasts for the Eurozone to 0.8% from 1.2% for 2014 and to 1.1% from 1.7% for 2015. Manufacturing and factory output remain weak across the Eurozone and with little GDP growth and Italy going back into recession, any benefit from lower oil prices and a weaker €uro should provide some welcome relief. That said, unemployment remains stubbornly high at 11.5% and with inflation dropping to a 5 year low of 0.3%, it may need the ECB to finally announce a Quantative Easing programme to provide the extra stimulus the Eurozone needs.

UK consumer sales appear to be the main beneficiary of falling oil prices as retail sales rise and sales of new cars reach 2 million, up for the 32nd consecutive month, adding to the UK trade deficit which increased by a further £900 million. Both the UK Government and the Bank of England have warned this month of the impact of the global economy on domestic growth and with inflation predicted to drop below 1% we anticipate interest rates lower for longer. However, the OECD has said that the UK should raise rates in 2015 and the Bank of England says they will raise rates if necessary despite the turmoil in the EU. That said, the BoE have also intimated that low inflation is the pressing problem and it could therefore be a way off before rates rise, a view which is supported by an increasing number of analysts who are now predicting 2016.

GBP future inflation expectations expressed through 20 year Inflation Swaps had the same range as last month, closing at the low of 3.47%, with a high of 3.52%.

Finally, we would like to wish readers’ our best wishes for the festive season and for a happy and successful 2015.

This month we compare the historical price of Brent Crude versus the 10 year GBP Interest Rate Swap fixed rate. 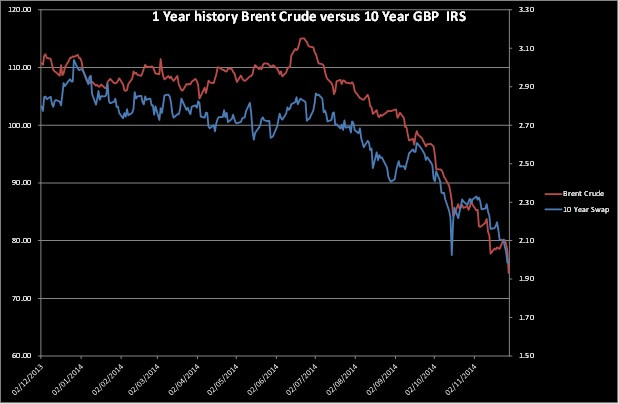