Last month it was 65% of economists and this month its 81% of global fund managers that expect a December interest rate rise in the US, with the Fed having given out the strongest signs so far that it will pull the trigger. That said, the Fed funds futures market currently implies that there is a 74% chance of a rate rise, which is a more accurate reflection of probability. With US GDP being revised upwards from 1.5% to 2.1% for Q3, unemployment falling to a 5 year low with a further 270k jobs being created and wage growth rising to 2.5% year on year it would appear that the data supports the rate rise view.

There are however a couple of issues that the Fed will have to consider when making its final choice. Firstly, there are signs of financial stress in the markets as corporate defaults rise to a 6 year peak of $95bn led by US oil and gas companies. Add to that the rising debt profile of corporates versus the size of their profits then it’s clear to see that highly leveraged borrowers will be vulnerable to rising rates. Secondly, the outlook for world growth has weakened as reflected in the volume of global merchandise trade and the shipping of commodities has fallen to its slowest rate since the financial crisis causing the WTO to cut its world growth forecast to 2.8%.

The main cause of the shipping slowdown has been China where the economy has shrunk for the 3rd month down to 6.5% and weak inflation of 1.3% is likely to result in more QE to boost demand. In addition, Chinese exports are down 6.9% and of greater concern for exporters in the rest of the world, imports are down 18.8%.

The impact of this can be seen in the UK where exports have hit a 6 year low and the trade deficit has increased by £9bn. With UK manufacturing having its weakest demand in 3 years, the Government likely to miss its borrowing targets and UK inflation below 0% for the 2nd month, it’s no wonder that the Bank of England has signalled that interest rates here are unlikely to rise through 2016.

Finally, we would like to extend to all our readers our best wishes for an enjoyable and relaxing festive season and a happy and successful 2016.

Our Graph of month demonstrates how the trading range of 5 Year Benchmark GBP Swap rates has been narrowing, the question is where next? 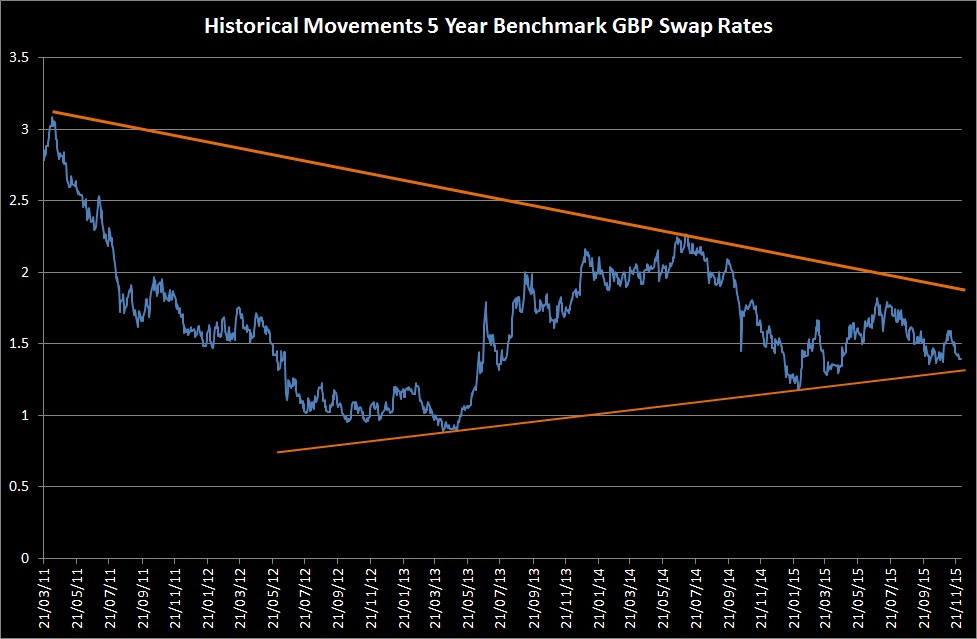