A View from the Cockpit

Last month we wrote – “Could this be the month that everything changes with a big vote on the 23rd?” Well, yes. Gilt yields collapsed when the news came through, with the 10 year yield falling through 1.0%, and short-dated Gilts pricing in a rate cut by the BofE – the 1 year Gilt traded at 0.25% and the 2 year 0.21% at midday on 30th June, before Carney’s announcement of policy loosening in the afternoon, caused them to move to 0.14% and 0.09% respectively. The fall in yields comes after Standard & Poor’s downgraded the UK from AAA to AA, and Fitch downgraded it from AA+ to AA, both left the rating on negative outlook. Moody’s placed their Aa1 (the UK sovereign lost its Moody’s Aaa rating in Feb 2013) on negative as well. Moody’s also changed the outlook on 12 UK banks and building societies to negative as it expects their profitability to reduce as a consequence of the vote. 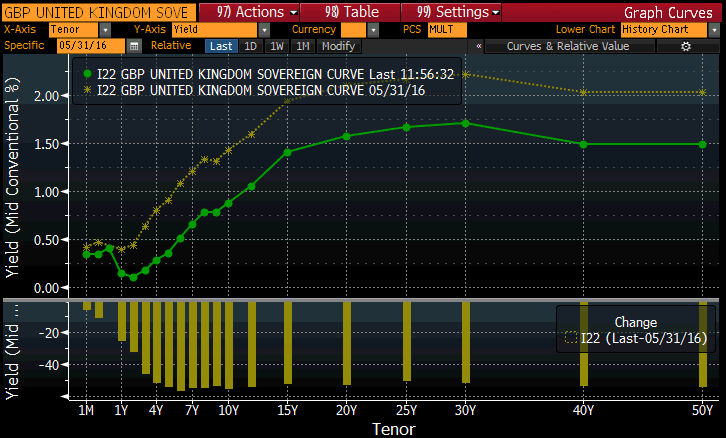 German bund yields contracted as well (given the flight to safety) with the 10 year tightening in by some 19bps following the BREXIT vote. It traded at -0.13% at end June, reaching its lowest level since 1807.

Spreads on GBP UK covered bonds widened out some 15-20bps on longer-dated (~10 years) paper post BREXIT, before recovering slight at the month end; with shorter paper demonstrating less volatility – less than 2 years widening by about 5bps. GBP Prime RMBS paper showed more marked volatility with spreads quoted some 20-30bps wider. Senior unsecured bank spreads widened the most for those banks with the highest direct exposure to the UK – Lloyds, RBS, Barclays widened an average of 35bps in senior 5 year paper.

Looking at the Eurozone, EUR UK covered bonds widened some 7bps post BREXIT, while core Europe held in. However, as has proved to be case historically, covered bond spreads have been hit less by market turmoil than other asset classes (see graph below). Senior bank spreads widened out some 40bps post the vote before retracing their steps at the end of the month.

Surprisingly the Nationwide reported a 0.2% increase in house prices between end May and end June. As for the future direction of the UK property market experts are warning of a slowdown in the market – Richard Donnell, insight director at property analysts Hometrack, said the immediate impact of the vote is “ likely to be a fall in housing turnover and a rapid deceleration of house price growth as buyers adopt a wait and see approach”. However, the potential for lower rates could be supportive as could the deprecation in Sterling for certain parts of the London market. Nevertheless, the equity markets appear to have taken a negative view with Housebuilders (Berkeley, Taylor Wimpey) falling back markedly and estate agents Foxton shares plummeting after issuing a profit warning – however, Foxtons is more a barometer for London and the South East than nationwide.

Mortgage Introducer reported the first signs of a tightening of lending criteria, albeit from two niche players in the market. The result of the EUR Referendum on Friday saw both Kensington and Fleet withdraw some of their high LTV products as they look to protect borrowers from market volatility.

There was virtually nil issuance in the GBP covered bond and ABS/RMBS markets in June.