In the month when it has been reported that after a century of domination the American economy is about to be overtaken by China, it is still the US that calls the shots in the financial markets. Even as the US recovery only inched forward in Q1 by 0.1% (v target of 1%+) the Fed brushed that aside as a temporary blip and cut its economic stimulus programme (QE) by a further $10bn to $45bn, saying that the recovery was now back on track. That said, it also announced its intention to keep interest rates low until at least 2016 and to focus on reducing unemployment and encouraging investment.

With the UK economy expanding by 0.8% in Q1, inflation dropping to 1.6% and unemployment dropping to 6.9% it would not be unreasonable to expect a similar strategy from the Bank of England. However, in reality we have a bit of a pull/push dynamic impacting the UK economy. On the one hand we have a consumer led domestic recovery with retail spending up 4% and house prices rising by 10.9% in April, yet what we need (according to the IMF) is a stronger export led recovery. That is a tall order however as our exports hit a 3 ½ year low with GBP strengthening against both the USD (4yr high) and EUR (2yr high), making our exports more expensive to our major trading partners.

QE or not QE?…that is the question for the Eurozone. Although inflation has risen slightly to 0.7% from 0.5% last month, the outlook remains deflationary as companies halt investments and consumers put off spending on non-essential purchases. The key figure of course is Germany, where lower inflation of 1.1% (v target 1.3%) is troubling for the peripheral countries that are slashing their costs to try and improve their competitiveness. Falling inflation in Germany will mean that they have to adjust costs even further, increasing the overall deflationary outlook.

GBP future inflation expectations expressed through 20 year Inflation Swaps traded within a tight range over the month opening at 3.61%, with a low of 3.56% and closing at 3.60% 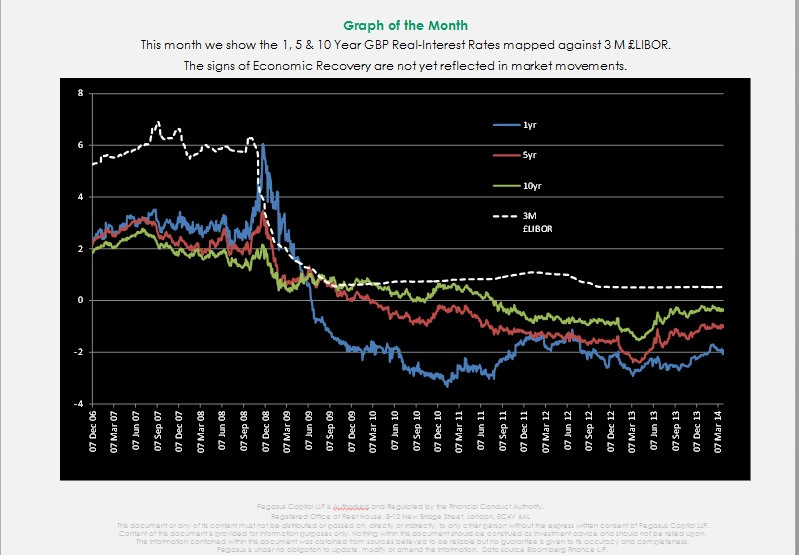