Economic Growth in the UK during Q1 has been quite disappointing, with the ONS advanced estimate showing activity barely changing in the first three months of the year relative to the end of 2017, with the ‘Beast from the East’ only partly to blame! Expectations for a 25bp interest rate increase in May reached a high of 90% in early April, but weaker than expected inflation reported for March, an unscheduled dovish interview with the BBC by BOE Governor Carney, and last week’s publication of the weak GDP data, pretty much ruled out the prospect of higher rates at the May meeting. As we write, expectations for interest rates over the next 12 months have declined to just one 25bp increase, itself not priced in fully until February 2019, and returning us to the levels seen at the end of 2017. One major UK clearer that was previously calling for an interest rate hike in May is now changing its call to no rate hikes through the end of 2019. It seems, for now at least, that the UK tightening cycle was as fleeting as the British spring!

In our 2018 outlook, we felt the window for the MPC to implement further increases in interest rates would be quite narrow, given that uncertainty around Brexit negotiations could become more fraught as we move closer to the Article 50 withdrawal date in March 2019. From the MPC’s perspective, the primary consideration for gradually moving rates up was an apparent lack of spare capacity available in the economy in the event that economic growth continued at the Bank’s forecast rate and whilst inflation remained above the 2% target. However, because GDP growth has been much slower than the MPC expected, and the currency has appreciated broadly and inflation has fallen more quickly than expected, it has taken away any immediate pressure for an interest rate hike. The possibility of a further increase in rates now seems very restricted, with perhaps August being the last opportunity, without risking overspill into the most intense period of the Brexit discussions and at the same time negatively impacting business confidence.

At present the market puts a slightly less than 50% chance on rates moving up at the August meeting. If more UK clearers move their call to no additional hikes, then we could see this probability move a bit lower. That said, we remain cognisant of the view of many MPC members (expressed in the November and February Inflation Reports) that dwindling capacity warrants an easing-off of the accelerator pedal in terms of stimulus. A better outturn for growth in Q2 with the currency stable (to weaker) and unemployment remaining at or below current levels still puts an August increase at a better than even chance in our view.

The entire term structure of rates has been flattened such that those previously worried about much higher interest rate and hedging costs on a 3 to 5-year horizon, now have a longer window of opportunity to lock in to what are still historically low financing rates. 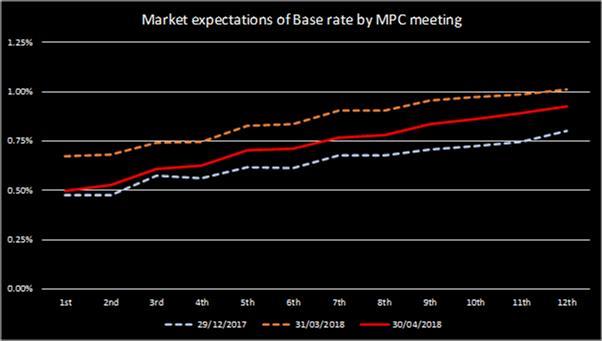