Yesterday’s FT article, which appeared on page 2 of the printed edition, highlighted the Bank of England’s concerns over interest rate complacency. It is worth noting that the BOE were given the inflation data on Friday, as this was stated by the ONS in this morning’s release and it is also likely that preliminary wage data was furnished at a similar time therefore, yesterday’s article could be viewed as more of a response to incoming data as opposed to simply being a generic argument about market complacency.

In the event that tomorrow’s earnings report captures the uptick in new hire pay rates reported by various personnel surveys (in conjunction with today’s announcement suspending the police and prison officer pay cap) we have to assume the probability of some MPC members voting for a hike will have increased.

We still believe the hurdle to an actual interest rate hike remains very high. Firstly, we think that the true hit to real incomes is understated by the official data, so a gradual uptick in earnings is unlikely to be repairing the damage to real incomes. Secondly, the uncertainty over the Brexit process itself cannot be ignored as a hurdle to higher rates either. The next reading of the Repeal Bill could lead to a major political roadblock domestically and therefore be even worse for the ongoing EU negotiations.

In addition, the currency is now recovering from its lowest levels in August, by early October (using current levels) the year on year change in the GBP trade weighted index will be close to zero, which compares to a 16.3% yoy drop a year earlier. This means the inflation pulse looking into 2018 will be dissipating, so for household inflation expectations to accelerate further in the months ahead we will have to see an even greater uptick in wages.

Overall the markets are expecting a reversal of the last 25bp cut sometime between 1 and 2 years from now but if the data continues to show signs of improvement there may be more pressure from more MPC members to vote for a rate rise sooner rather than later. That said, given some of the other factors above, a programme of rate hikes currently looks a way off. 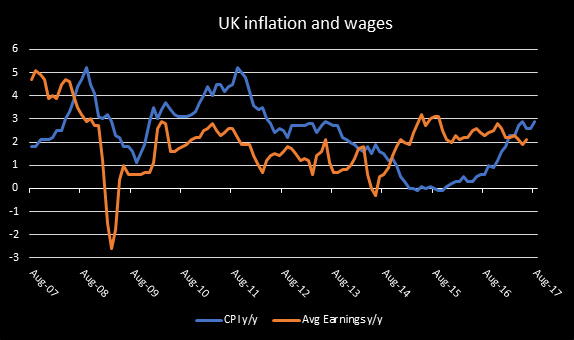