The year started with the wettest period in almost 250 years and 2014 ended having been one of the warmest in the last 150 years. The global mean temperature forecast for 2015 from the UK Met Office is that it will be warmer than 2014 mainly due to the effects of the El Nino weather system, which tends to cause “freak weather events” across the world.

Similarly, the global financial markets have experienced another year of uncertainty as the same issues of the Eurozone, QE and global economic performance have remained at the top of the agenda. Add to that the El Nino type events of rapidly falling oil prices, increased geo political tensions in Europe and the rise of ISIS and you get a sense that it’s probably best to leave home with an umbrella, sunscreen and a woolly hat, just in case!

Whilst it is difficult to accurately predict the impact of a stronger US Dollar on the emerging market economies, what an increase in US interest rates will do to overvalued assets or the prospect of lower oil prices for a sustained period will have on a fragile global recovery, what we can be certain of is that elections across Europe in 2015 will determine the future of the EU federalist agenda and the future of the United Kingdom.

The storm clouds have already formed over Greece where public elections in January may well deliver a non-EU friendly thunderbolt, which if followed by Italy, where all 3 opposition parties are campaigning on a platform to leave the Euro, could lead to a messy divorce and break-up of the Euro. Our focus of course will be on the 7th May and our own elections where the “non EU Party”, the “have a referendum on EU membership Party”, the “stay in the EU Party” and the “leave the UK but join the EU Party”, will battle it out in the closest election for a generation.

GBP future inflation expectations expressed through 20 year Inflation Swaps closed at the yearly low of 3.37%, with a high of 3.70%.

Our Graph of the month shows the last 10 Year movements of the 50 Year GBP Benchmark Interest Rate Swap which ended the year trading at it's historical low. 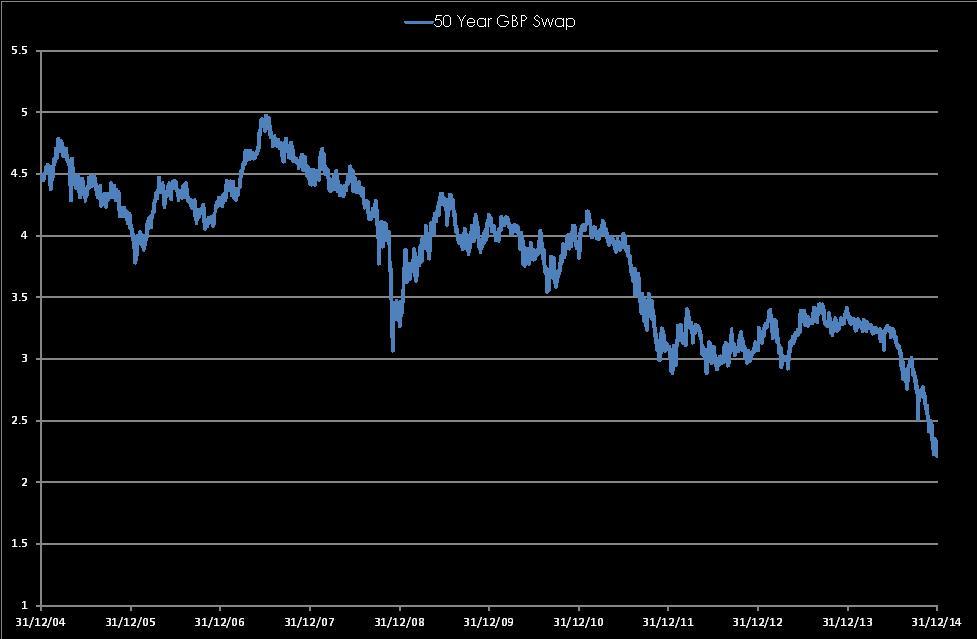