The last 6 years or so have seen Central Banks across the world keeping a tight control on money supply and interest rates, trying to stimulate growth, encourage investment and reduce unemployment. The question that has yet to be answered is what do they do when there are no more tricks in the magic box?

In the US, it would appear to have gone pretty much to plan. The financial stimulus (QE) has been repaid, unemployment has come down with 257k jobs added in February being the strongest since 1977 and growth has resulted, albeit with a slight downward revision in Q4 to 2.2%. Whilst the Fed is ready to raise interest rates it knows that a premature rise could slowdown domestic growth, it could increase the value of the dollar making exports less competitive and it knows it cannot ignore the current concerns about the global economy.

The OECD has also expressed concern that the global economy risks falling into a low growth trap. Certainly, the global shipment of goods as indicated by the Baltic dry index being at its lowest since 1986 would seem to suggest that might be the case, but of more concern is the faltering Chinese economy which continues to slow. The countries that have ridden the Chinese growth wave such as those that provide many of the commodities, will feel the impact. As the commodity prices necessarily fall, the deflationary impact will be more pronounced as we have seen with the US falling back into deflation, 17 of 19 Eurozone countries recording negative price growth and even the Bank of England warning that inflation could drop below zero.

So what do those Central Banks do next, when they have used most of their room for manoeuvre……..they reduce their interest rates to protect their currency just as they have done in Australia, South Africa, Indonesia, Denmark, Sweden and Switzerland amongst others. Who would have thought the Bank of England would announce it is open to cutting interest rates to below 0.5%?

With record low rates it’s no surprise that global lending in 2014 passed the 2007 record of US$6trn, with businesses and individuals looking to purchase assets that will give them a better yield than the fixed income markets. No wonder we have seen the German Dax, the US S&P, the UK Footsie 100 and the World Equities index reach record levels this month!

GBP future inflation expectations expressed through 20 year Inflation Swaps also moved higher through the month, opening at the low of 3.12% and closing at the high of 3.29%.

Our Graph of the month compares the current 3 Month USD$ Futures versus where these expectations were 1 & 2 years ago. 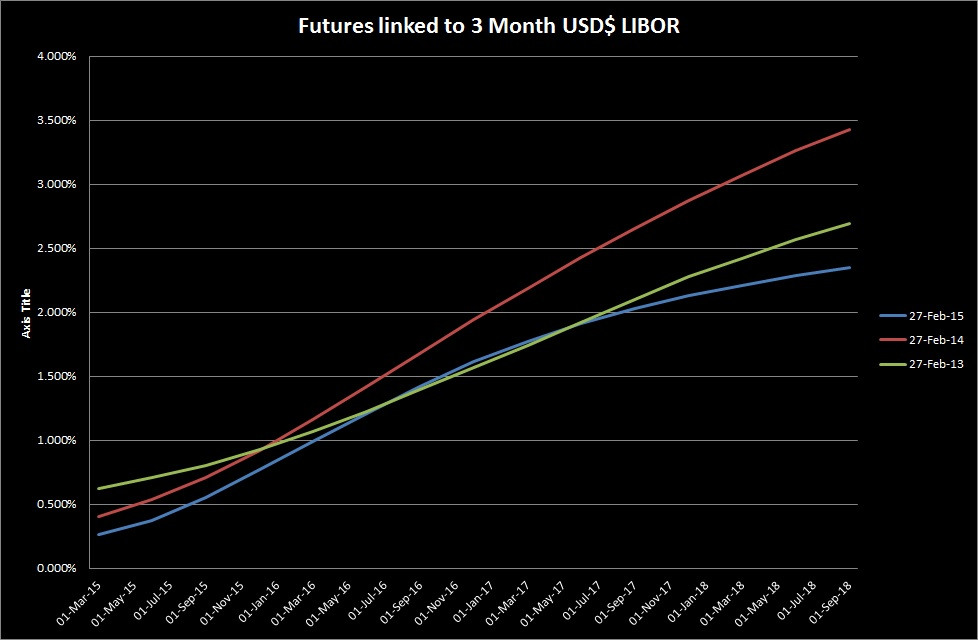