“The secret of change is to focus all of your energy not on fighting the old, but on building the new” said Socrates some 2,500 years ago. The voters of modern Greece have had enough of fighting the old EU imposed austerity and have voted for change in the form of a new force in Greek politics. With Greece’s debt at 175% of GDP and unemployment at 26%, the Greek government is looking to a new agreement with its creditors that would tie its repayment obligations to growth rather than austerity. This may avoid a loss of face for either side but may take time to negotiate; with 3 year bond yields climbing above 19% and Greek bank shares falling 25% a stand-off between Athens and the ECB will only exacerbate the situation.

Elsewhere in Europe monetary policy was the focus of the month with the ECB eventually announcing QE with bond purchases of up to €60bn per month until September 2016. However, it was the actions of the Swiss and Danish central banks that moved the markets with Switzerland catching everyone off guard and some dealers off side, by announcing that it would no longer peg its currency to the Euro. Of more significance has been the cut in interest rates in Denmark to -0.5% and in Switzerland to -0.75% which in turn has resulted in negative bond yields. This has implications for both the ECB and the Bank of Japan which may choose to cut rates further if their focus on asset purchases does not stimulate enough growth.

In the UK and US in particular, it is more of a question of when to raise rates. With both countries experiencing annual GDP growth of 2.6% in 2014, the Federal Reserve has signalled that it remains on course to raise rates this year whereas the Bank of England sees no rush to return rates to “normal”. That said, neither are immune to the impact of global deflation as the BoE warns that it is now possible that the deflation in the Eurozone of -0.6% may be exported to the UK, where inflation has hit a 15 year low of 0.5%, whilst in the US inflation dropped to 0.8%, something it has seen only once in the last 15 years at the height of the economic crisis in 2008.

Wow, what a start to the New Year!

GBP future inflation expectations expressed through 20 year Inflation Swaps also moved lower through the month, opening at the high of 3.37% and closing at the low of 3.12%.

In the Graph of the Month we compare the last 2 year yield movements of the EURO, GBP, US$ and Greek Government 10 Year Bonds 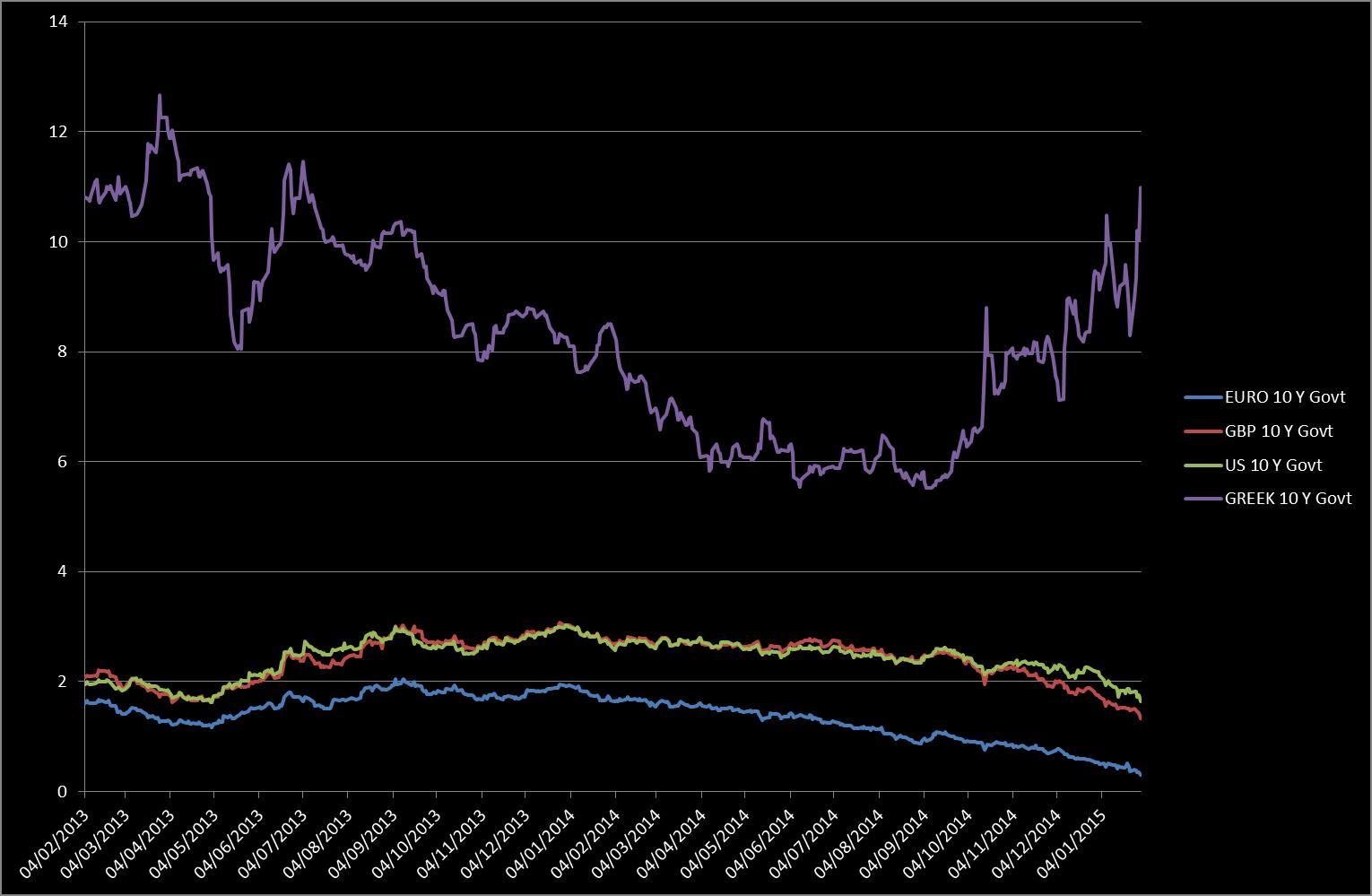