100 years ago a group of armed rebels in a country on the periphery of the Austro-Hungarian Empire caused the whole of Europe to declare war on each other. There is much more at stake in the modern world so thankfully it is economic sanctions that are the weapon of choice but they will undoubtedly have ramifications for the economic outlook of Europe. In fact you have to go back more than 500 years to have seen European Government bond yields as low as they are now and the markets continue to think that some sort of Quantative Easing from the ECB is inevitable. With German factory orders falling and Italy, Holland and France seeing manufacturing declining by 1.2%, 1.9% and 2.3% respectively, there are clear signs that monetary stimulus is required. In addition, the inflation rate continues to drop and this month was down to 0.4% from 0.5% and the underlying remains downward. If there is a glimmer of hope in this month’s European stats it is that unemployment has continued to decline to 11.5%, down 1% since this time last year.

In the US, unemployment has fallen to 6.1% as the economy continues to create over 200,000 jobs a month and with household spending up to 2.5% from 1.2% it’s no wonder that the US economy has expanded by 4% in the 2nd Quarter. Whilst the Chair of the Fed is cautious on growth prospects (as is the IMF which reduced its forecast from 3.7% to 3.4%), if jobs continue to grow at the current rates, there is an increased possibility of a rate rise in Q4. That said the Fed is likely to end its QE programme in October so there will have to be some more robust figures in Q3 for the economy to demonstrate it is ready to absorb a rate rise.

A UK rate rise is drawing closer according to the Bank of England Governor but it will be “gradual and limited”. With UK GDP surpassing pre crises levels and the IMF revising its forecast upwards to 3.2% the market has already priced in a rate rise in Q4 however, with the Pound currently strong against both the USD and EUR (overvalued according to the IMF) any export led recovery has to be questioned. Already this month we have seen the consequences of a strong currency adversely impact the profitability of a number of our internationally focussed corporates and it is also reflected in our trade deficit which has risen to £2.4bn in May from £2.1bn in April and versus a forecast of £1.6bn. Combine that with Government borrowings being well above expectations and signs that house price rises are tailing off, the market may just be ahead of itself.

GBP future inflation expectations expressed through 20 year Inflation Swaps range this month was a low of 3.51%, a high of 3.61% and a closing at 3.52% 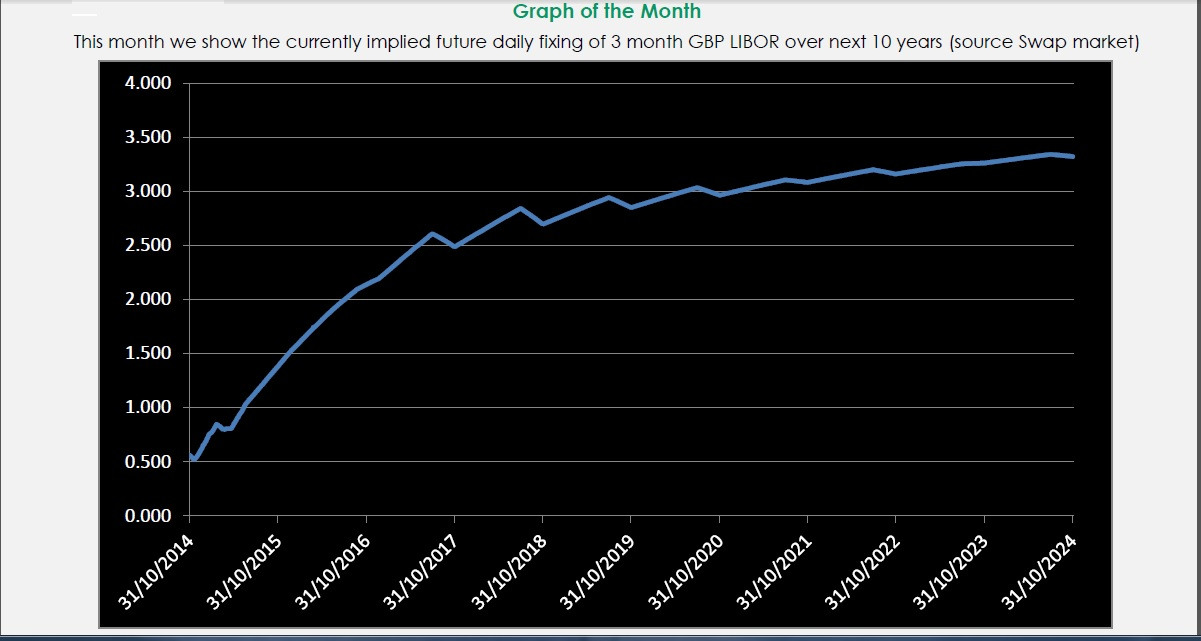