Who would have thought (apart from Sir Mick Jagger and Lynton Crosby) that the Conservative party would win a majority in the UK general election or that the SNP would all but sweep the board in Scotland! Irrespective of the outcome, the room for manoeuvre is pretty limited with Public sector net debt passing the £1.5trn mark in May, a trade deficit of £2.8bn and the Bank of England lowering its growth forecast in the quarterly inflation report to 2.6% from 2.9% in February. That said, with UK unemployment dropping to a 7 year low of 5.5%, the UK experiencing deflation for the first time in 60 years and consumer confidence back to pre-2006 levels, we could end up spending our way to more growth.

In the US despite unemployment falling to just 5.5%, consumer confidence is falling and consumers are just not spending, reflected particularly in new home sales which fell 3.3% in the key Spring season. As a whole it was confirmed that the US economy shrank by 0.7% in the first quarter versus an initial estimate growth of 0.2% which combined with manufacturing growing at its slowest rate in 2 years and the trade gap widening on rising imports, has led the Federal Reserve to put off the much anticipated rise in interest rates. In her most recent speech Fed Chairwomen Janet Yellen said that as long as the economy appears to be improving the Fed can be expected to raise the benchmark interest rate during the latter part of 2015.

In the Eurozone it has been a combination of the QE bounce, which has led to a fall in the value of the €uro benefitting exporters, continued low borrowing costs and deflation giving consumers more spending power that has continued to see an expansion of the Eurozone nascent recovery. However, the concerns about the possibility of a Greek exit from the Eurozone continue to dominate the market and with a further scheduled IMF payment in this first week of June, the chances of striking a deal on reforms and access to emergency funding to avoid any default look increasingly forlorn. The Greeks themselves appear to have little confidence of a breakthrough as they withdrew about €800m from the banks last week.

The Graph of the Month maps the difference between Market perceptions and the actual 3mth GBP LIBOR fixes over time. 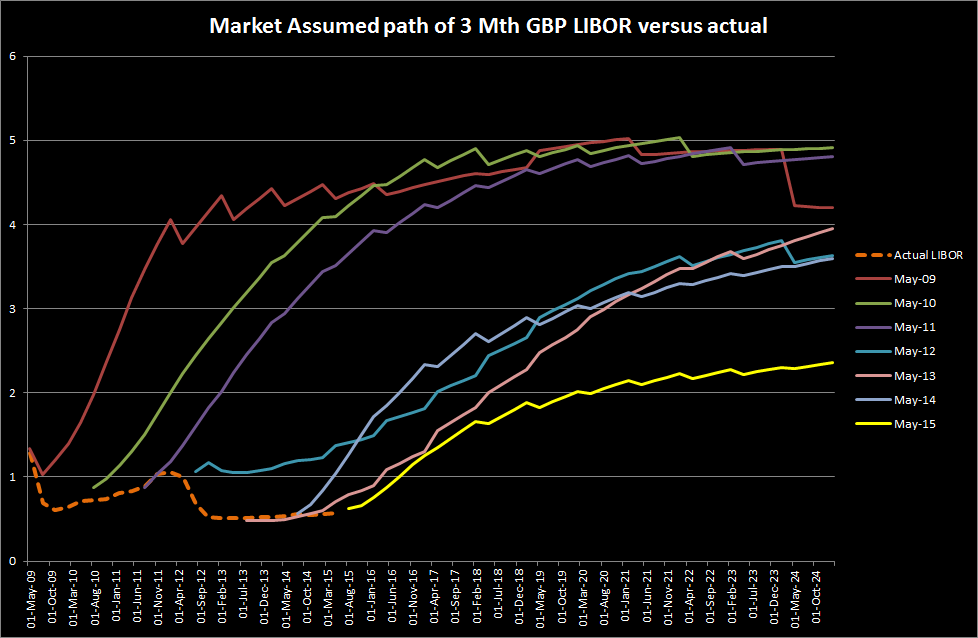