Like going into Ye Olde Sweet Shoppe without knowing if we want pear drops or some fudge, Brexit is bringing out that hard toffee/soft toffee debate amongst us all! Added to that, whether you love it or hate it, Marmitegate brought to everyone’s attention the first real signs of the impact a Brexit vote will have on day to day spending. As the Pound reached a 168 year low and inflation rose to 1% UK business confidence hit a post referendum high, with jobs growth being sustained and unemployment still at just 4.9%. Early manufacturing data signaled a strong economic performance which was borne out as the UK economy grew in September by 0.5%. The BoE kept rates unchanged and defended its use of QE as being good for growth but indicated that it will not rely on QE as the only fiscal stimulus.

With all eyes in the US on politics rather than economics, it’s clear that the US economy is performing well with many of the US banks reporting their best results since the crisis, the services sector picking up and pending home sales rising the most in 5 months. It was still a surprise to see Q3 GDP grow by 2.9% (v expected 2.5%) and well above the 1.4% for Q2. This all points the way to a December US interest rate rise, depending of course on the political result!

The Eurozone also maintained some growth at 0.3% and the ECB kept rates unchanged. The biggest story of the month however was the saga of the free trade agreement due to be signed with Canada after 7 years of negotiations being blocked by the Wallonia region of Belgium. Ultimately the deal was signed but it highlighted how the forthcoming Brexit negotiations may be fraught with difficulties, albeit that the UK starts with a free trade agreement already in place.

Fact of the month: OPEC announced early October its intention to reduce its oil production by one million barrels per day its first attempt at a production cut since late 2008. The promise of reduced supplies sent oil prices 5% higher on the day but they ended the month down at just under $50 per barrel.

GBP future inflation expectations expressed through 20 year Inflation Swaps ended at the higher on the month, opening at the low of 3.38% and closing at the high of 3.66%.

Our graph of the month shows the historical movements of the front month Oil futures over the last 5 years. 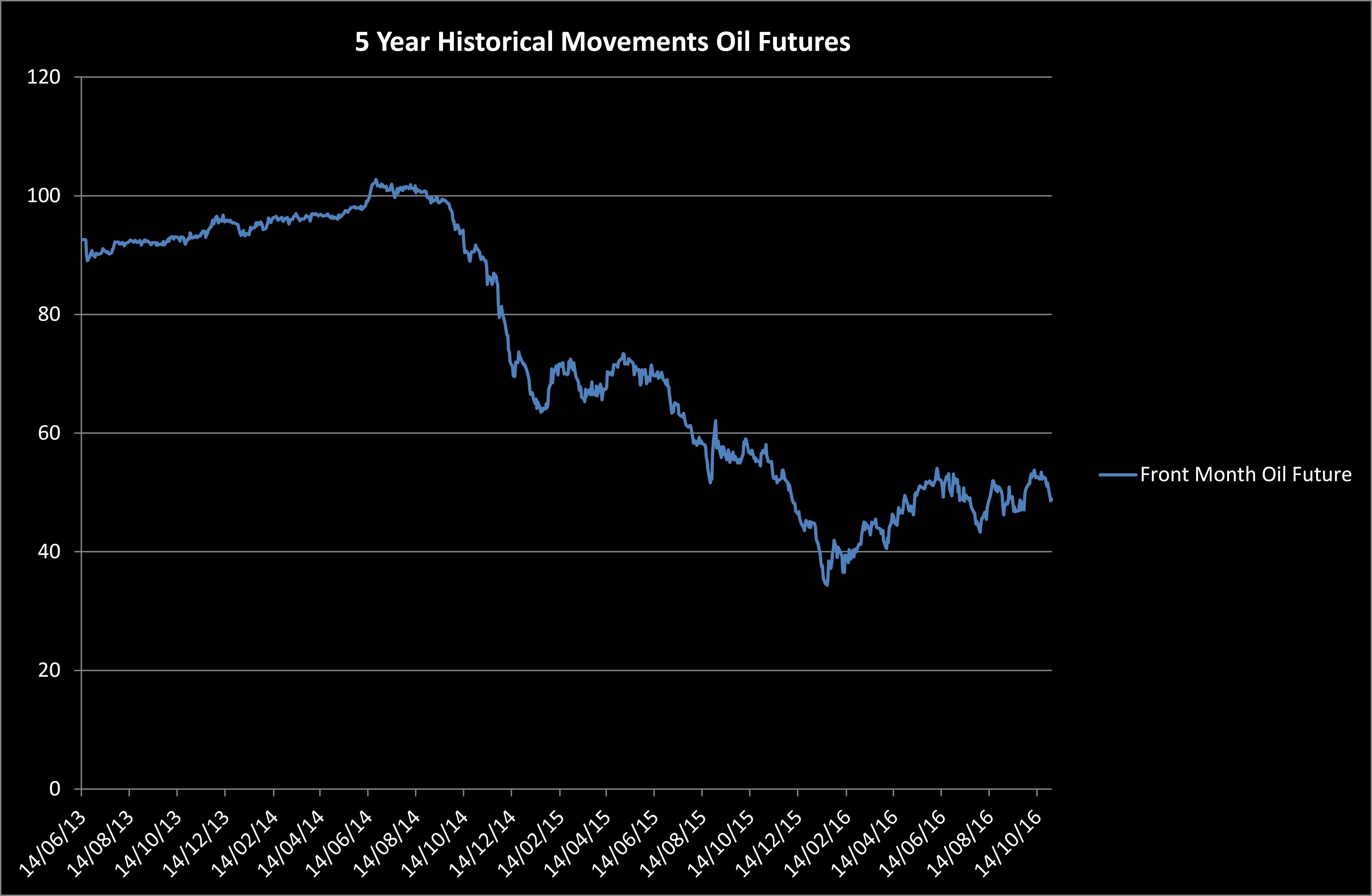