They think it’s all over…..well it is now for Quantative Easing in the US! In one of the biggest experiments ever in monetary policy management, the Federal Reserve has confirmed an end to its bond buying programme. On the face of it, this has been an undoubted success in saving the financial system from meltdown and giving corporate America time to recover and create new jobs. With unemployment dropping to 5.9% and the GDP for Q3 growing at more than 3%, its mission accomplished, so far. That said, the markets have changed their tune recently and investors interest rate rise expectations have moved out from Q2 to Q3 as the global economic outlook deteriorates, oil prices fall further and inflation is predicted to reduce in the coming months.

In the face of weaker than expected inflation data, it was Japan that surprised the markets this month as it announced further increases in its own bond buying programme to weaken the Yen further in order to drive an increase in exports. The yen is now at its weakest against the dollar since early 2008 and has dropped 32% since 2011. In sharp contrast we saw the Brazilian central bank raise its benchmark interest rate amid slow economic growth and concern about the country’s weakening currency and the Russian central bank raise its benchmark interest rate by 1.5% to 9.5% to try and stem the weakening of the Rouble versus the USD which is down 24% this year primarily on the falling oil prices and to try and tackle inflation which is currently running at 8%.

Although inflation in the Eurozone has edged higher to 0.4% this month, the outlook has probably deteriorated as German factory orders have dropped 8.5%, output by 4% and exports by 5.8%. Industrial production across the Eurozone as a whole has fallen 1.8%, down 1.9% year on year so the pressure remains on the ECB to provide the stimulus that the markets expect by announcing a QE programme in the coming weeks. Whilst the Bank of England Governor has said weakness in the Eurozone will not dictate UK interest rate policy, we are not immune from the impact of low inflation in Europe as Sweden has found out in recent times resorting to reducing their benchmark interest rate to zero in an attempt to combat ultra-low inflation. In the UK, inflation has dropped to a 5 year low of 1.2% versus an expectation of 1.4%, easing expectations of an interest rate rise in the near term and a clearer indication that low rates may be here to stay.

GBP future inflation expectations expressed through 20 year Inflation Swaps range this month was a low of 3.42%, closing at the high of 3.52%.

Our Graph of the Month is a comparison of the expectations of GBP, EUR & USD LIBOR interest rates through their respective futures contracts. 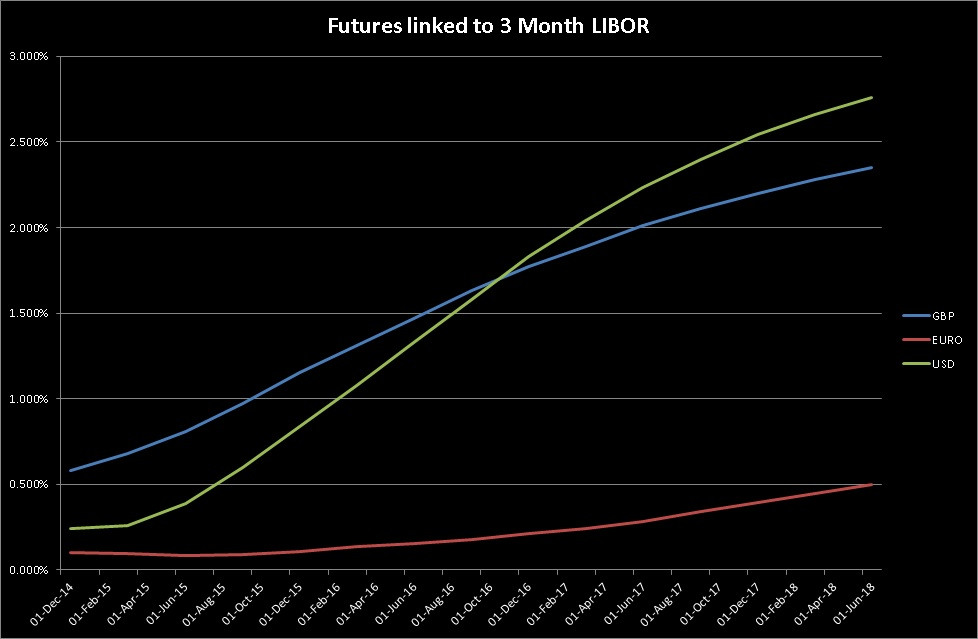