In the end the answer is still NO. That’s not in relation to Scotland voting to remain as a part of the UK but the ECB’s decision not to opt for full-blown QE. Instead, the ECB cut rates to a record low of 0.05%, launched the first round of its new €400bn of long term refinancing operation (LTRO) to boost bank lending and is pushing for “junk” rated asset backed securities (ABS) to be accepted as eligible collateral. The actual take up of the new LTRO facility was only €82.6bn, and with Eurozone growth in Q2 grinding to a halt at 0%, business confidence, particularly in Germany, falling on fears of the impact of Russian sanctions and consumer price inflation dropping to a 5 year low of 0.3%, sooner rather than later there could be a Yes vote for QE!

The UK on the other hand kept rates unchanged for the 66th month in a row despite house prices rising 11.7% year on year, car sales rising for the 30th consecutive month, unemployment dropping to just over 2 million and the UK economy being 2.7% higher than pre-crisis levels. The counter balance for any immediate interest rate rise is much more structural, with inflation dropping to 1.5% in August (potentially dropping further on oil prices falling below $100 per barrel), wage growth only increasing by 0.7% and UK manufacturing stagnating on reduced demand from our biggest trading bloc the EU. Moreover, the UK continues to increase borrowing, with a further increase in August of £11.6bn, rather than reducing its fiscal deficit.

It is this increasing level of borrowing not just in the UK but around the world, that policy makers are getting increasingly nervous about. The combination of high and rising global debt and slowing nominal GDP growth suggests that the global economy could be heading for another crisis according to the influential Geneva Report. The OECD is downbeat on world growth forecasts reducing them to 3%, well below pre-crisis levels and the IMF has warned that increased risk taking (including traders borrowing record amounts to invest in appreciating assets) and geo political tensions will also harm the global economy. The report concludes that interest rates across the world will have to stay low for a very very long time to enable households, companies and governments service their debts and avoid another crash! As we said last month, we see no evidence to change our “rates lower for longer” view.

GBP future inflation expectations expressed through 20 year Inflation Swaps range this month was a low of 3.44%, a high of 3.51% and a closing at 3.49%

This Month we look at the 5 year historical graph of the EURO USD FX rate, will European weakness cause the test of 1.20? 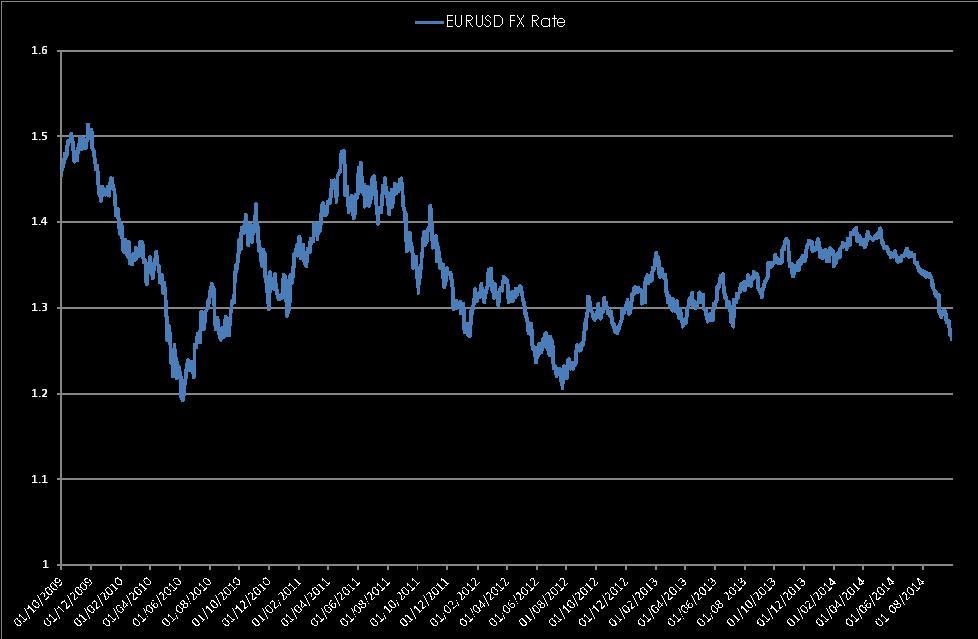