Guessing when interest rates might rise is as difficult as predicting which political parties will form the next UK government. However, for those of you that have been following our thoughts on this since 2011, you will know that we have consistently pointed out that rates will be #LowerForLonger (Twitter @pegasuscap) due to the effects of QE, the structural deficit and the overall levels of personal and government borrowing. As recently as October 2014 the capital markets were predicting a UK rate rise in April 2015, which changed to October 2015 by the start of the year and now, following the disappointing 0.3% GDP growth in Q1, has been pushed back to July 2016. With inflation remaining at 0%, our trade deficit with Europe at a record high and our national debt increasing by £2bn a week, whichever parties control parliament they will have their work cut out to balance the books!

In the US, last month’s revision downwards of the annual GDP figures was just a foretaste of the downbeat news to come out this month. The jobs data showed about half the number expected at 126k and retail sales only climbed 0.9% failing to reverse the long term trend. With inflation only edging up to 0.1% and the strength of the US$ hampering exports and reducing corporate earnings, analysts were expecting a drop in Q1 GDP to about 1% so it was a shock to the markets when growth of only 0.2% was announced. This data will give the Fed plenty to think about and the markets are already predicting a delay in a US rate rise from Q2 to Q4 or even to 2016.

It’s been rare over the last few years for the Eurozone to be the star of the global economic picture but with GDP growth up 0.5%, it has grown faster than both the UK and US….perhaps the ECB’s QE programme is beginning to have an effect! That said, the Greek conundrum has not been resolved and with Eurozone ministers saying that they will not receive another bailout it was not surprise to see Greece downgraded by Moody’s to Caa2, just 1 notch above “highly speculative with likelihood of default”.

Fact of the month: More than 30% of all government debt in the Eurozone (€2 trillion) is trading at a negative interest rate.

GBP future inflation expectations expressed through 20 year Inflation Swaps again ended higher on the month, opening at 3.30%, with a low of 3.28%, and closing at the high of 3.47%.

This Month our Graph of the Month compares the past and predicted moves of GBP 3 Month LIBOR (as derived from the Interest Rate Market), GDP & Inflation (based on the average Private Economist view). 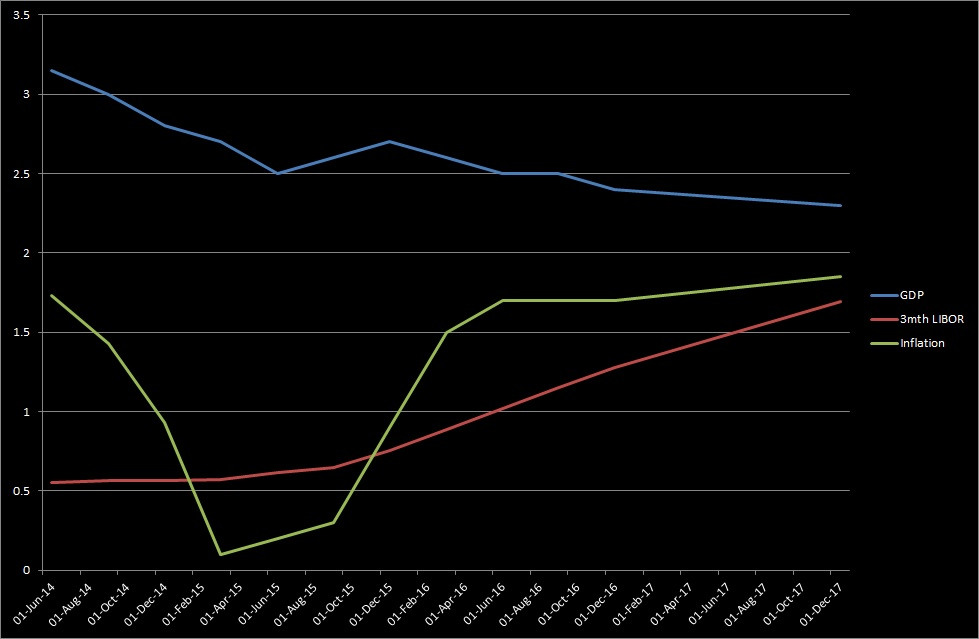